Even at seventy-eight years of age, Marie Spirochete was the iron fisted matriarch of the Spirochete wine empire.

The Spirochetes were one of hundreds of Italian families that clung to a nucleus of wine grapes through the Prohibition.  Then they survived the grim poverty of the Depression, the loss of their young men during WWII.  The nineteen-fifties and sixties was a time of growth for the Spirochete holdings as they supplied bulk wine grapes to the major vintners who made “jug” wines.

Marie, as a young bride, sensed a change in the wind.  She hired a boutique enologist and vintner to make potent, concentrated wines from the ancient Zinfandel vines that grew outside their headquarters.  It was a fortuitous intersection of timing, grapes, climate and merchandizing.  Ten years later she was taking those bottles of wine to fairs across the United States and winning gold medals.

Then the internet allowed the Spirochete empire to sell wine across the world.  Less fortunate neighbors waggishly noted that they were selling twenty times more “Estate Bottled, Caliche Canyon, Old Vine Zinfandel” than could be made from the Zinfandel they grew.  Even if they  muttered such things, other vintners were more egregious in their fraud and the Spirochetes were both generous and vindictive.  The mutterings were made in private.

Marie ran a tight ship and was ferociously protective of Spirochete Estates financial reputation.  Economic downturns resulted in waves of bankruptcies in the grape industry.  For reasons that are opaque to some, the grape industry is permeated with romance and bewitches investors.  Large swaths of the industry regularly go into receivership during downturns...and Marie was always there to pick up the prime cuts for pennies on the dollar.  Marie loved grapes but she never allowed that love to blind her to the economics.

The legalization of cannabis catapulted Marie from a local power to an international one.  She foresaw the legalization a full decade before it happened.  She originally saw it as a threat to the wine business.  Unlike wine, prime cannabis has a 70 day turn around and can be grown in basements and warehouses anywhere in the country.

Ever the practical person, she decided to prepare for that eventuality.  She hired 20 recent graduates with Masters in Marketing.  All of the new hires had three things in common.  They had all graduated at the very top of their class.  The University that they graduated from was considered "second" or "third" tier.  And they all habitually slept less than four hours a night.

She set them up as marketing managers for 20 "boutique brands" of vodka and let Darwin take the reins.  Vodka is pure distilled spirits and tap water.  The boutique vodka were chemically identical to $7-a-fifth vodka but sold for four times the price.  The difference; unmitigated bullshit and a 300% mark-up that fell to the bottom line as pure profit.

After three years she fired the ten lowest performing brand managers, reorganized the country into three zones (East Coast, West Coast, Texas and everything else).  She gave the remaining brand managers a tune-up.  She coached them to ruthlessly hammer anybody dared infringe on their brands.  She encouraged them to lavish donations on elections, especially for judges, and to track the effectiveness of hired legal services with clinical precision.

Then  she awaited developments.

The day before the Senate passed legislation legalizing weed at the Federal level, she divested the vodka business but kept the business structure.

She called in favors and was able to delay the POTUS signing the bill into law for sixty days.

She told her 10 hot-shot brand managers that they had two months to dominate the marketing channels for pot.  She gave them an unlimited budget to purchase trademarks and brand names and otherwise gain possession of the choke-points that create the perception of "quality".  The brand managers unleashed the legal hounds-of-hell they had spent a decade feeding.

The second the POTUS signed the law legalizing pot the servers at the United States Patent office went to their knees in an apparent denial-of-service attack.  Even the back-up servers appeared to puke.  It was the collective results of hundreds of attorneys across the United States simultaneously submitting applications for Trade Marks.

Within a year the Spirochete empire was collecting 10% of the retail price on every gram of Mimosa, Hindu Kush, Purple-Haze, etc sold in the United States. She also owned the trademarks for "Doobies", "Blunz", "Squibs", "Whale Turds" and hundreds of other "street" names for finished goods.

You could still buy "generic" weed, but it was not the name-brand stuff that set one apart as a connoisseur of the finer things in life. One's guests were never impressed by generic.

She raised her children in her own image and likeness even as she turned a blind eye to her husbands philandering.  He might wander but she always knew where he was spending the night and divorce was never an option.

Frank was the apple of her eye.  She sent him to University of Southern California to cultivate connections in high places.  When he asked to live in luxury condominiums she did not bat an eye.  She had already researched the condominiums and knew that is where the movers-and-shakers sent their children.  That is where Frank met Bona-Brown.  BB had celebrity name recognition.  Frank brought a healthy war-chest and the portfolio of people skills he had acquired at his mother's side.  Together, Frank and BB were unstoppable.

When Frank received word that his mother had violent dysentery with blood in the stool, he feared the worst.  Bona-Brown released him to visit his mother, a woman who BB was closer to than his own mother.

Frank flew in a two helo convoy that left Sacramento at 11:30 PM local time.  After all, there was a civil war going on and the Spirochete Estates were on the leeward side of the coastal mountains east of Salinas.

The main hacienda was tucked into a flat bottomed valley that inserted itself into the spine of the mountains.  Cali Highway 152 ran up a pass that threaded through the mountains to the east.  Helicopters invariably followed 152 to avoid the inevitable turbulence that tumbled off the jagged, sun-baked mountains.

Miguel and Bonita received word that two helos had taken off from Sacramento and flown in the direction of Salinas.  They had ten minutes to leave their hide and set up.

The two helos were in close formation with the rear chopper to the right and above the leading chopper.  The choppers had been been farther apart but the lead chopper had slowed as they neared their destination and the trailing chopper had not adjusted 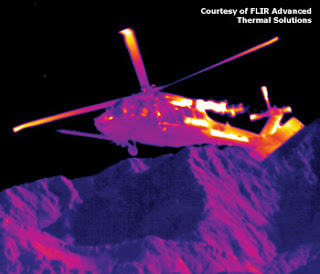 Spirochete was in the lead chopper because the prime targeting for a heat seeking missile is from the rear where the IR (infrared) seeking head can see the engine exhaust and the tail-boom which has been heated by the exhaust downwash.  The trailing copper is in a “blocking” position;  it is the designated decoy

The night was ideal for IR guided weapons.  The sky was crystal clear and the IR background was cold and uncluttered.

The pilots were expecting the possibility of a ground attack as they crested the ridge.  The lead chopper instinctively flared to the right and pitched into a dive as the missile Miguel launched lit off the alarms on left side.  The pilot's goal is to deny the missiles a hot juicy target by putting the engine exhaust on the far side of the helo's body.  The pilot was confident that the rear chopper was matching his maneuvers as he punched out the decoy flares.

What the lead chopper pilot did not know is that Miguel had timed his launch so the rear chopper's view of Miguel was blocked by the lead chopper's fuselage.  The trailing chopper never saw the rocket's exhaust flare nor could his sensors alarm on the IR/UV signature from the solid rocket fuel.

Bonita was a half mile north of Miguel and they used laser communication to coordinate.  She launched a half-second after Miguel.  A half second was optimal for "getting inside" the opposing side's OODA loop.  She was targeting the rear chopper.  The rear chopper flared down and to the left, into space that had been vacant seconds before but now contained the lead chopper.  The main rotor of the  trailing chopper cleanly removed the vertical stabilizer and rear rotor of Spirochete's helicopter.

The trailing helo lost lift as half of its rotor shttered.  The helo fell from the sky, sunfishing like a brahma bull.  The missile launched by Bonita's ignored the flares.  It had a smart head and recognized the light profile of the flares as non-targets.  However, it missed the helo as the flight pattern did not match any target profiles.  It sped past the helo and detonated five miles out.

It was a moot point to the crew of the helo.  It hit the ground at 150 mph and the remaining fuel exploded.

The leading chopper, the one carrying Spirochete took longer to die.  The pilot backed off the blade's pitch to reduce the torque and vectored the exhaust to attempt to counteract the yaw.  It was not enough.  The chopper was slowly winding up when Miguel's missile blew the tailboom off.  Then the chopper went nose down and the rate of yaw increased exponentially as Spirochete's chopper corkscrewed itself into the ground at a high rate of speed.

There were no survivors. 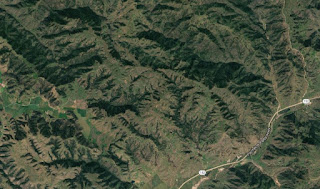 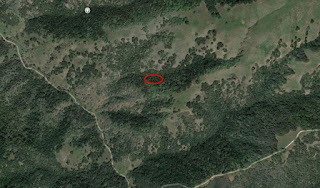 Bonita and Miguel executed their bug-out plan.  That involved using night vision goggles to hike for three hours north on one of the innumerable hiking trails that laced the area.  Then, they moved a quarter mile off the trail and hunkered down in chamise chaparral (Adenostoma fasciculatum)* for four days. 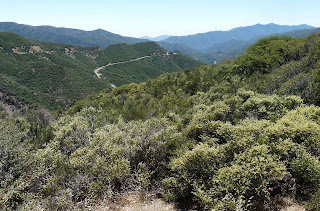 A deer can hide in a patch of cover the size of a dining room table.  Hunters almost always ignor those tiny patches of cover because they are sincerely convinced that the cover is too small to hide a rabbit, and too dense to comfortably search.  Miguel and Bonita were cold-camping, they left a heat signature no larger than two deer.

Most campers would have been extremely aggravated by the need to comb each other’s naked bodies for ticks on an inch-by-inch basis several times a day. But in their case it was more of a feature than an aggravation, given the other activity that they were using to pass the time.

* A tip of the fedora to Lars Rosengreen the Curator of the Carl W. Sharsmith Herbarium for his assistance in helping me understand chaparral ecology.