"Why are you so paranoid?"

"Why are you so paranoid?" is a legitimate question from a college-aged person to a person in their sixties.

Some of it is attributable to the environment we grew up in.

If you were technically minded and grew up in the 1960s and 1970s there was enough information floating around for you to design your own fission bomb...as in nuclear bomb. The most difficult thing about constructing a functioning nuke for the local science fair was finding 25 pounds of Pu239. Ahhh, if only they had Amazon.com back then...

The mechanism behind an uncontrolled, nuclear event is similar to how epidemics spread: Patient 0 (or the first atom) emits virus (neutrons) that combine with other patients (nuclii) of the same species. The new patients/nuclii go unstable and spew another generation of virus/neutrons which in their own turn combine with new naive patients/nuclii.

And if you thought about critical mass a little bit, you quickly came to an understanding about how geometry played a role. The critical mass of a sphere is lower than the critical mass of cubes spread out in checker-board fashion or if shaped into the rind of a grapefruit. Detonating "the bomb" generally involved rapidly changing the dispersed Pu or U into a shape resembling a sphere.

Nuclear explosions are self-limiting. The heat causes the fuel to expand or vaporize. It quickly changes from the efficient geometry to one so dispersed that less than 1.000 neutrons are captured for every nucleus that splits.

Efficiency, from a weapons designer's standpoint, involves changing the geometry rapidly enough, and keeping it super-critical long enough to maximize the amount of material that splits before it is dispersed.


The Demon Core
There were events in the 1940s where nuclear scientists fiddled with borderline-critical masses of radioactive material. Sometimes they killed themselves. 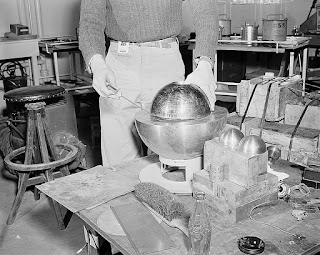 The most documented events involved the Demon Core.

What is most notable is that the scientists were not twiddling with the core but with the environment around the core, modifying the number of neutrons reflecting back into it.

Covid-19
The two scientists who were killed, Daghlian and Slotkin, were among the best-and-brightest of their generation.

It is inherent in the nature of events described as having "exponential growth" that things can get out-of-hand faster than normal controls can activate.


The "drop" criterion for the control rods needs to be dispersed, aggressive, automated and  unambiguous. The rods can always be inched up after the rods are triggered. Covid is everywhere and another "light off" will be faster than the original event.

In the economic restart of Covid-19, the edicts of Governors will also be too slow if/when it lights back up. There will not be time for speech writers to craft pretty language, or time to schedule TV time or time to be "orderly". That is when it pays to pack your own parachute and make your own conclusions.

One observation is not data
I read in various comments that Covid-19 was a fizzle and that proves Covid is not a force to be reckoned with.

I think that is drawing too large of a conclusion from one go-around.

Slotkin's fatal experiment was an experiment he had run several times before with no ill-effects. It was a tiny thing that made the difference. His screwdriver slipped for a fraction of a second. A very tiny thing.

Posted by Eaton Rapids Joe at 6:57 AM