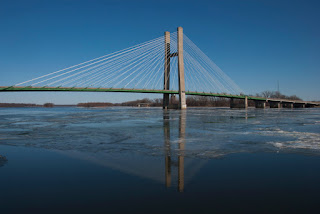 Walt Shaw threw Steve and Sally for a loop when he informed them that they were had to part ways.

They had just crossed the Mississippi river from Illinois into Burlington, Iowa.

Both Steve and Sally were taken completely off-balance by the news.

Walt was apologetic but firm. He even had a letter from the Charter supporting his claim.

Steve was to continue on to Ames, Iowa. Walt had business that needed to be attended to and that business was on the west bank of the Mississippi River, some 200 miles by road or eight days away from Ames.

Walt was very willing to stick with the expedition for one more day. The Amish north of Huntington, Indiana had entrusted the expedition with a half-dozen fruitcakes to give to satellite community in Iowa. The expedition had been amply paid with hams and smoked pork. The timing was excellent. It was a week before Christmas and the Amish community was on the way to Ames.

The expedition found the Amish community with no problem. They were nestled in the erosion-sculpted hills between Kingston and Sperry, Iowa. The fields too small and irregularly shaped for modern farm equipment to operate economically but they were of a scale well suited to the horse-farmer.

Unfortunately, only five of the six families were still in the area. The elder...who was not all that old...apologetically said that the sixth family had moved to Ottumwa, some seventy miles to the west.

Steve was disinclined to deliver the last fruitcake before fulfilling his mission. Traveling to Ottumwa entailed back-tracking ten miles to the south before heading west. And the Amish in Sperry didn’t have an exact address. All they could share was that the one, missing family was somewhere south of Ottumwa.

The parting of ways was anti-climactic. Steve counted out silver to Walt to “settle up” Walt’s trading profits. A half dozen, five-gallon buckets and Walt's “kit” were off-loaded and then Steve and Sally were on their way. At least neither of them were walking and their daily mileage could easily surpass 25 miles.

Walt bunked the first night in one of the Amish barns. Even at 10 degrees Fahrenheit, a deep mattress and blanket of fresh, bright straw can be a cozy bed.

Walt was surprised when at first light he found himself accompanied by most of the adult, Amish men in the neighborhood.

“Our wives sent us to help you” the Elder told Walt.

“Don’t you have chores to do?” Walt said, baffled by the workforce at his disposal.

“It is the middle of the winter. We all have children who can pump water and care for the animals” they assured Walt. Walt did not need to know that the children, in many cases, were ten and eleven years old. They were PROUD to be trusted with the family animals and would undoubtedly do a sterling job in caring for them.

Walt decided to not look a gift horse in the mouth.

“Do you fellas know of any old lead or zinc mines?” Walt asked. According to the old atlases and encyclopedias this part of the Mississippi valley had once been the United States' primary source of those metals.

“You mean like the old mine down yonder?” one of the men said, pointing toward a gully east of the barn.

Four miles later, Walt and the five men found the old mine. The seam was collapsed but that was not where Walt’s interest lay.

“I don’t know a lot about mining, but I was told that the ore was processed and then the waste...what they call the tailings...were dumped somewhere. That is what I am looking for. The tailings.” Walt said.

The Amish looked one to the other. They were mystified by Walt’s blindness.

You see, it was glaringly obvious to the Amish where the natural features that had eroded over thousands of years were covered by man-made piles. It was as obvious to them as the differences between 12 point Times New Roman and handwritten cursive is to a modern reader.

Much of the Amish men’s life had been spent behind a plow. The plow peeled back the sod and revealed what was beneath the hood, so to speak. Over the decades he learned to read subtle changes in the surface and know if the ground was light-and-easy sand, clutching clay or grabby cobbles beneath the surface.

Walt was skeptical as the Amish men swarmed the site, driving stakes in to delineate the boundary between the spoils and the virgin land.

By then, the shadows were lengthening and it was time to head home. The Elder invited Walt to dinner and to sleep in his barn that night.

Much to Walt’s surprise, the entire crew of Amish were at the job site the next morning.

It did not matter that Walt’s request, to peel off the spoils and skim the clay beneath it made no sense to them. Their wives had made it clear to them. What Walt wanted. Walt got.

Walt only needed to tell them once. He only wanted the clay that was stained a deep, walnut brown. In some places it was only a quarter inch deep. In others, almost an inch.

Most men would have been totally gassed in half an hour. Shoveling dirt and rocks is the heaviest work imaginable. The Amish hit it hard for a full, eight hours. While slightly more arduous than most of their farm work, they were hardened by pitching thousands of bales of hay into the barn lofts, shoveling hundreds of bushels of grain and walking hundreds of miles behind plows.

On the third full day, the Amish brought horses and back-blades. The horses were in need of exercise.