Is there budget pressure to pull the plug on Saturdays? 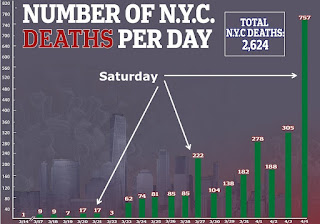 I could accept that undertakers might report Sunday deaths on Monday if the data showed the numbers ballooned on Mondays. That is not the case.  The deaths that one would expect on Sundays are showing up on Saturday.

Color me cynical, but in the factory we scheduled work on Saturdays instead of Sunday because Saturday was time-and-a-half while Sundays were double-time.

Unfortunately, I can believe that a medical political/industrial complex that is capable of partial-birth abortions is entirely capable of making pull-the-plug decisions based on budget considerations or "taking the hit" on a day when it will get buried by the news cycle.