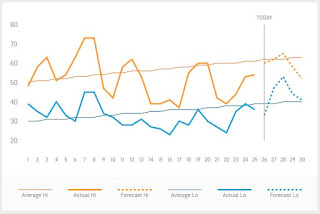 Plants virtually stopped growing after April 8 as the temperatures stayed below 50F. The daffodils, forsythia and apricots are still blooming. On April 8 we had 40 growing degree-days, base 50. At the end of today we were at 55 degree-days, base 50 and are about 10 days behind "normal".

According to the weather guessers, we will go above fifty tomorrow and the day after.

I planted some elderberry cuttings outside today. I started them inside under lights.

The cuttings were from some plants I had seen while taking Kubota into class in Lansing. The tops of the bushes were poking above the 5' tall, wooden fence. Based on the shape of the fruit clusters I think they are a variety called Bob Gordon. I asked the home-owner if I could have some cuttings and she graciously agreed.

Then, I did a little bit of research on elderberries and it appears that there is a variety called Marge that is easily twice as good as any other cultivar. It is more resistant to drought and bugs than other varieties and it yields twice as much per year.

I guess I will be looking for cuttings of "Marge" next winter.

I found and fixed a short in the electric fence.

I threw some fertilizer around the younger trees in the orchard.

I dug a few oak seedlings today and traded them for some spruce seedlings. The lady also threw in a tamarack seedling for good luck.

I did see one thing I thought was odd. I have a couple of super-hardy apple cultivars. Like Alaska/Saskatchewan/Alberta hardy. One is Kerr and the other is Trailman. Both of them had pollinating insects swarming them even though the flowers look like they are five days from opening. They either have extrafloral nectaries or they emit a scent that is irresistible even before the flowers open.

The only other notable thing I did was to put brown, paper lunch-bags over some of the grafts I made earlier this week. The brown bags function like small greenhouses and warm up the graft just the right amount. Plastic bags would cook them.

I slide the bags as far down the stem as I can and then secure the bottom (the open end) by squeezing close to the stem and taping with masking tape.

One tweak that is necessary in windy areas is to crush the length of thepaper bag. Otherwise, the loose paper acts like a flag and batters the scion. In very windy locations, it is desirable to use masking tape to secure the crushed bag midway between the bottom and top so it does not balloon and then batter.