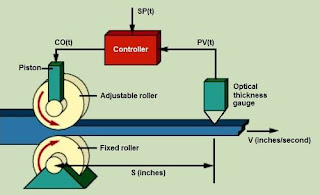 Sadly, I have been down the road where well documented, proven technology was not used because
A.) The decision maker was ignorant of the fact that off-the-shelf technology existed
B.) They were proud of their ability to come up with "Home Made" solution.
C.) NIH syndrome
D.) They derived some advantage from the fragility of their kludged solution(s).

Existing technology
The principles of "controlling" a process are well established. They have their own jargon. They stubbed their toes on all the furniture and flagged the shoals and reefs.

For example, the image shown above is from a tutorial at the Control Engineering website.

The specific article is about "The Smith Predictor" which presents a solution to the problem of known lag-times between a corrective action and being able to quantify the effect of that action. The Smith Predictor was first proposed by Otto Smith in 1957. It is not a radical, new idea. It is used every day in steel mills, oil refineries and chemical plants.

Instabilities
There are two main causes of instability in control systems.

One of them is excessive gain, that is over-correction.

The second main cause is lag-time between corrective action and being able to verify the results of that action.

Consider adjusting the temperature of the shower in the morning, a task all of us have done thousands of times.

What does a typical person do? They turn on the hot-water tap and monitor the temperature coming out of the spigot for the tub. Once it starts to warm up, they add cold water to suit, then turn the valve to direct the water to the shower head. They wait fifteen seconds and then step beneath the shower to complete their shower.

Why does EVERYBODY do it that way? There must be a reason.

It is pretty clear that first running the water through the spigot has at least a couple of advantages.

LESS LAG TIME! There is less time between the adjustment of the knobs and the results as felt in the output. The path to the spigot is shorter and the water-flow rate is greater. The hopeful bather can make many, small adjustments using the spigot in the time it would take to make one adjustment using water flowing out of the shower-head.

Further, if forced to use the shower-head, some bathers would become impatient and over-compensate and burn themselves. If they didn't burn themselves, they would oscillate wildly between TOO HOT and TOO COLD and never settling on a tolerable solution.

Other bathers very timidly make adjustments and are never sure when their change takes effect. They can be in the shower for hours adjusting the temperature while everybody else in the house is impatiently waiting to use the bathroom.

Frankly, do the bathers who are forced to modulate water temperature by running the water through the shower-head sound like our problem restarting the post-Covid-19 economy?

Saving you from details
I will not pound you with details about Control Engineering.

One key point is that restarting the economy cannot be binary ON/OFF. The restart has to be modulated with the lowest risk segments leading the higher risk portions. Three-shift operations might start with a single shift or it might rotate through all three shifts with a cool-down shift between productions. Note that the factory could be flooded with ozone in the off-shift to prevent cross-shift contamination.

The economy has to restart on a "earn your way as you go" basis, a concept that is foreign to some people but should be familiar to most of my readers

Some counties and industry will clean-and-jerk the start-up. Others will keep toppling backwards.

There is no need to reinvent the wheel. We have a chance to stand on the shoulders of giants.

***Added at the bottom because it didn't fit into the flow of the post***
We need to stop obsessing about the technologies we don't have. We don't have universal testing with five-minute turn-around. 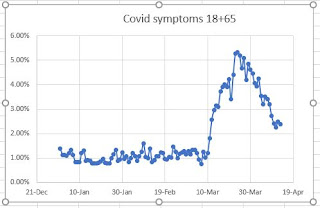 We do have the ability to monitor common symptoms like shortness-of-breath and running a temperature.

Yes, I know that not every Covid-19 patient has an elevated temperature. But the object of statistics is to make inferences about the population based on the measurement of a sample, not diagnose individuals.

But if more than 1.5% of the patients showing up at Doc-in-a-Box have symptoms of Covid-19, then your grip on the tiger's tail is slipping.