Windbreaks for the orchard 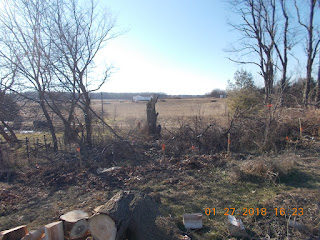 The Captain suggested that I might want to plant a windbreak upwind of my orchard after I told him that I suspected the wind was causing apples to fall from the trees before I was ready to pick them.  I pointed out where I had started doing that.  You can see the orange surveyor's tape.

Then he said, "I meant on my side of the fence.  I am not using that strip for much."

What a great neighbor!

The current plan is to have a mix of tall trees and shrubs.  I want it to look pretty because the Captain will see the top of that hill every time he drives up his driveway.


Scarlet Oak are not considered a prime mast producing species but I am willing to make concessions to keep my neighbor happy.

Persimmons
Persimmons ARE a prime mast producing species and have great fall/early winter visual interest as they hang onto their fruit. 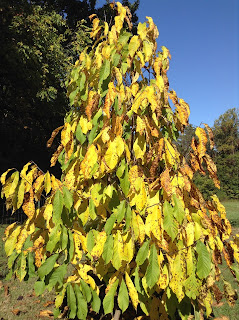 I will plant some Pawpaws as a tall bush to fill in gaps.  Pawpaw suckers, that is, forms thickets by throwing up shoots from roots that are near the surface.  While I don't care that much for the taste of Pawpaws, some people do.  The large leaves that hand downward and the buttery, yellow color are distinctive.

Redbud is native to Michigan and we are near the northern limit of its range.  It likes to grow on the cusp of river valleys where the horizontal uplands break downward.  Like Pawpaws, Redbud is a tall bush that suckers eagerly, perhaps because the individual stems tend to be short lived.  Pawpaws and Redbud are tolerant of partial shade.

Wild Black Cherry
There are already few Wild Black Cherry growing north of the gap shown in the photo.  The trunks are free of limbs for the first fifteen feet and don't do much to block the wind.  I plan to tuck a few Redbuds beneath them to stiffen the gap.