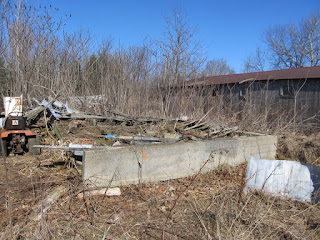 It may not look like much but that is about four hours of work.

Old NFO commented on an earlier post.  He said that the foundation gave him the willies because it looks like rattlesnake heaven.

We only have one kind of rattlesnake in Michigan, the Massasauga rattlesnake.  He is a shy and retiring fellow and not very common.

This is a great time of year for this kind of work.  It is cool.  The highs are in the forties.  Low temps make it easier to wear boots and stout clothing.  Late winter is almost bug free, and that includes yellow jackets and other stinging insects.  Reptiles are torpid and if you see them it is because they are sunning and are extremely visible.

Gooseberries
I ran across two gooseberry bushes while working on the barn.

I will likely take some cuttings off both bushes with the intention of planting them where they might survive as semi-wildlings.
Posted by Eaton Rapids Joe at 7:23 AM