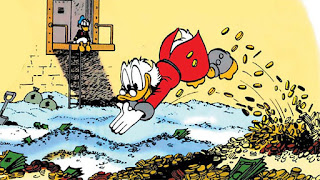 David Dreman, an author of books on contrarian investing, claimed that a Scrooge McDuck segment formed his beliefs about wealth.

Scrooge McDuck is awakened by his three, mischievous nephews (Huey, Dewey and Louie) with the fake-news that gold, silver and currency no longer have value...that the new "money" is fish.  Having no fish, Scrooge is a pauper.

Wealth distribution and job quotas
That is why wealth distribution and job quotas fail.  Wealth is not the medium of exchange.  Wealth is the ability to focus, the willingness to work, the cultivation and nourishing of social connections and the willingness to be your own advocate.  That is, wealth is a portfolio of character traits.

Of course, this is also why "revolutions" that advocate the massive transfer of assets and punishing of the successful are destined to fail.  The advocates see revolution as a shortcut to wealth.  History suggests there are few shortcuts to developing the character that is true wealth.
Posted by Eaton Rapids Joe at 8:35 AM