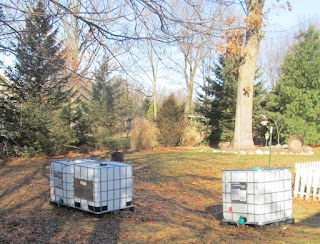 Onondaga and I took a road trip yesterday and picked up my Intermediate Bulk Containers (IBCs).

It was a beautiful day to be on the road.

The house where the gentleman was selling the IBCs had impressive landscaping.  He knew we were coming and had two of them staged for us to load.  I pulled the caps, sniffed inside and tasted the "goo" on the bottoms of the caps to ensure they were truly "food-grade".  Yup, sure enough....frosting.  The containers had been used to transport sugar icing.  SWEET deal for $85!

I wagged my puppy-dog tail and asked a few questions.

The gentleman is a young guy named Trevor and he obviously has a lot of hustle.  He buys a wholesale lot every couple of weeks because he has a side business and it was cheaper to buy them wholesale and sell the extras.  They are big sellers at orchards, wineries and maple sap collectors.

I asked him what he used them for... 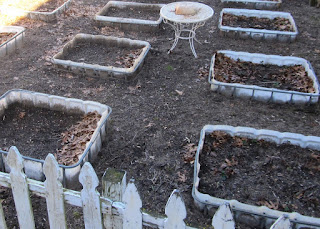 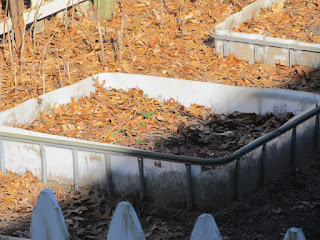 He uses some of them in the garden.

But the reason he got into the business was because... 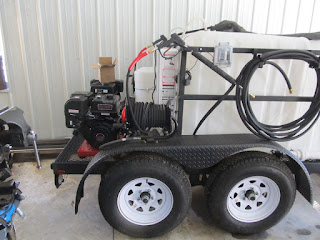 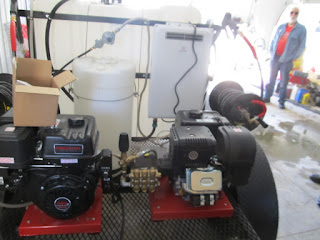 I asked him how much a rig like this cost and he said a two IBCs, two motor/pump, two soap dispenser unit runs between $10K and $12K.  I asked him about the 20% spread and he said he was including the cost of shipping in the spread.  Shipping is expensive and if a customer from the west coast wants to buy one of these rigs then he is willing to build and ship it.

I asked him why all of the redundancy...two of everything.

His reply was that it gives the operators a lot of operational, and pricing, flexibility.  For example, one IBC can carry pre-soaped water and one can carry plain water.  One soap dispenser can carry a bleaching cleaner and the other a wax.  The operator then has the ability to go into a salt-water marina and offer a la cart a freshwater rinse, a soapy pressure wash, a bleach wash to kill mildew and/or a wax job all mix-and-match, all from one trailer.  All for a price.

Knowing that backing up trailers can be a pain, I asked him if there was a practical limit to the length of the hose.  Ideally, an operator could park at the curb and run hose to the mossy deck behind the house or the pole barn with the mildewed roof out back.

I asked about the double hoses.

Trevor said it was just a matter of economics.  Most businesses run two guys in a pickup truck.  Say the job is to pressure wash a fleet of delivery trucks or to wash and wax a lot full of used cars.  Two guys show up, two hoses means both guys can be working the entire time.

If you want to buy some first class, food grade IBCs or are interested in buying one of Trevor's pressure washing trailers, you can reach him by texting (269) 818-7167 or email.

His reply was that an operator can double-stack the 275 gallon containers and move them with a fork truck inside of a standard semi trailer.  The 330 gallon containers are too tall to do that.  You can move a 275 and a 330 together but then the fork truck operator has to pay attention and you complicated billing, manifests and handling.