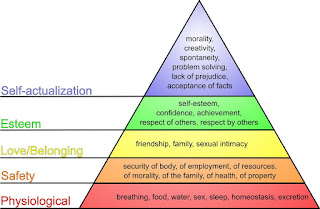 Maslow's Hierarchy is a motivational theory that contends that individuals are motivated to achieve the lowest level that the individual has not yet achieved.  By way of example, the person who is gasping for breath is not motivated by the pursuit of creativity.  Their actions are dedicated to getting more oxygen in their lungs.

The Marine recruiting slogan of "Be All You Can Be" is an appeal to the desire to be at the pinnacle of the motivational pyramid.

Small Business Owners
As a group, I believe that the owners of small businesses are among the most "self actualized" people on earth.

The small business owner never knows what skill-set will be called upon on any random day.  It might be running a marathon when a piece of equipment is broken, it might be first-aid skills or counseling or being a mechanic.  It can be accounting or tax law or conflict resolution.  Taking inventory or juggling production schedules or performing chemistry calculations.

At this point the small business owner would raise an eyebrow and say, "I am not motivated by those things.  I do them to survive."

Granted.  However, you need a tolerance, if not desire, for the exhilaration of outrunning the tiger.  It helps to be an adrenaline junkie but is not absolutely necessary.

Regulators
I wonder how much of regulator's animus toward business owners is motivated by envy.

Surely they went to college and penned the usual drivel in their yearbooks about "...becoming self actualized..."  And there they sit in their anonymous cubicle, in an anonymous building in a boring city and answering to a no-nothing boss.

The answer:  Replace the envy with self-righteousness and a feeling of moral superiority.  That will smother the envy.  You bet.  Squash those business owners.

Note:  One of my coffee drinking buddies used to milk cows.  He got out of the business after a regulator wrote him up for having two, 40W fluorescent tubes beside the mirror behind the worker washbasin rather than a 100W incandescent bulb on the ceiling twelve feet above the wash basin.

Posted by Eaton Rapids Joe at 7:38 AM