I recently had a long phone conversation with Jay, the brother of a friend.  My friend remembered that Mrs ERJ and I went through a period where we had difficult parenting decisions to make.  Part of that path had us rubbing elbows with people who had really tough parenting responsibilities.  They had much to share.  I listened.  My friend thought I might be able to help his brother.

Jay has a son and a daughter in their late teens.  They are still in high school.

Both kids physically assault him and his wife on a regular basis.


In my youth, 9-1-1 is what you called when bullets were flying, arterial bleeding was spraying the walls or you had a fully involved house fire.

The economizing of first responder services resulted in the paring down of administrative services and a greater reliance on mutual aid, centralized dispatch.  Calling your local police department "after hours" will get you a recorded message directing you to call 9-1-1.  Yup, you are expected to call 9-1-1 even if it is just the neighbor's dog barking too loudly.

The 9-1-1 operators are trained to keep things calm, perform triage, ask the right questions, and then direct the appropriate resources to the problem.

But you witnessed a crime


The disconnect for Jay is that he is my age.  In his universe, calling 9-1-1 results in a SWAT team bursting through your doors.  It is not like that any more.


---Disclosure---
I had an incident.  I was visited by Child Protective Services.  I am not proud of that but it is germane to this essay.  The two social workers set me straight.

Calling 9-1-1 is a call for an outside intervention.  It is a way of getting help.

In fact, if you have been physically assaulted, even if it is by a family member, you have witnessed a crime and have an obligation to report it.

On a practical note, the kid who assaulted "dad"  breached some serious behavioral barriers.  The person who assaulted "dad" becomes much more likely to assault others...including "mom", teachers and other unsuspecting potential victims who might be less capable of defending themselves.  And having breached the barrier to "physical", the step up to using weapons is that much easier to breach.

This is not a time to stoically suck-it-up out of sense of machismo.  This is a time to put on your big-boy pants and address issues with assault.  Do it NOW rather that hope it gets better.  Hope is not a plan.  Hope is magical thinking.

It is all about getting help and keeping people safe

Those resources are looking for a signal, a document trail, to justify their activation.  Because those services are not cheap.  But broken bones, lacerations, concussions and missed work days are even more expensive.

9-1-1 calls are one to the surest ways to generate that signal and create that document trail.

If you and Junior or Buffy get physical:  Call 9-1-1.  Or if you are unable to call 9-1-1, have your spouse make the call.  Tell the operator you want to report a domestic dispute.  Report whether it is still in progress, or not.  Tell them no weapons are involved (unless, of course there are weapons involved).  Tell them a minor is involved.  Tell them you want a policeman to respond to take a report and to ensure that things stay settled. 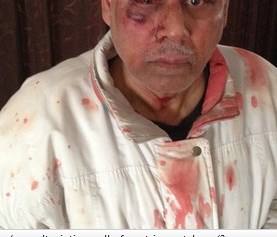 Don't clean yourself up.  If you are bleeding, let it bleed.  If your lip is puffy, don't put ice on it.  If your shirt has three popped buttons, don't change.  It is all evidence.  Cleaning it up before the police come is tampering with a crime scene.

Most likely, the first few times the cops show up they will sit with you (both) until they are assured that you are both under control.  They might take Junior around the corner and explain the facts of life to him.  Sometimes that is all it takes.

At some point, you will make the "frequent flier" list and the responders will suggest that you need to do something more.  You have a choice.  You can send your kid to jail. Or you can direct that your child be transported to an Emergency room prior to being admitted to an institutional setting.  That would be the institutional setting where medicines are aggressively adjusted.

Note:
I hope none of my readers (except Jay, should he ever see this) ever need to use this advice.
Posted by Eaton Rapids Joe at 7:17 PM