The big economic news today is that the Fed will be raising the discount rate 0.25% after six years of lowering the rates.

This post is to put a little bit of context around that move. 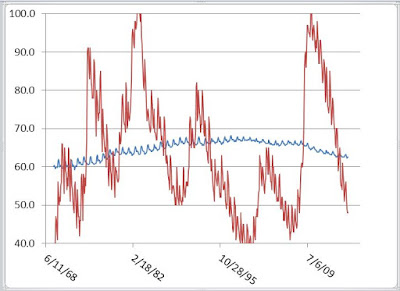 The rise in civilian participation rate from 60% in 1968 to 68% in 1980 is likely due to increasing numbers of women entering the labor force.

The seasonal variation takes a marked decrease starting in the 1990s.  Here is a closer look.

Likely contributions include the implementation of NAFTA in 1994.  Much agriculture work moved south of the border where wages were lower and environmental regulations were less restrictive.  Another factor may be the increased fixed costs of hiring made it uneconomical to employ people for temporary jobs. Another large source of temporary jobs involve infrastructure projects like roads and bridges and spending on those kinds of projects slowed down in the '90s. Finally, most seasonal jobs are "marginal" in terms of return to the enterprise.  These would be among the first jobs to be eliminated when belt tightening.

Perhaps the most significant issue is that the two lines are extremely decoupled. This paradox contributed to the Fed's analysis-paralysis. One would intuitively expect a corresponding decrease in the civilian labor participation when the unemployment rate is high.  That is just not in these numbers.

One explanation might be that unemployment is not the only way folks can leave the labor market.

Employees can go on disability.  Employees can retire.  Both of these are popular options if it looks like you are about to be permanently pink slipped.  Conversely, one person might delay their retirement plans if their partner was laid off.

Another factor is that the recruitment pipeline can dry up.  A person cannot be counted as having left the labor market via "unemployment" if they never worked.  I know one young person who was distraught to learn that they could not collect unemployment because they had never worked.  It is not just young people who overlook this fact.

The issue of air bubbles in the job recruitment pipeline is one of the most under-reported stories of the economy.  The decrease in seasonal variation that started in the 1990s may also be part of the air bubble story.  Seasonal work used to be a common path to full time employment.

Unemployment is self extinguishing


The unemployed person automatically falls off the rolls after a period of time.  A high unemployment rate is self extinguishing.  Legally, the unemployed person is supposed to be looking for work while unemployed.  That is not rigorously enforced.  Employers are loath to hire an employee if they believe the employee will leave the instant they are called back by the original employer.  Also, it is tough to get motivated about looking for a minimum wage job when you were laid off from a job that paid 2X minimum wage.

Why rates were dropped in the first place


One major reason the rates were dropped is that bank regulators required that banks increase their "loan loss reserves" in 2008/2009.  In the fractional banking system, each dollar "telescopes" and is loaned out several times.  Consequently, injecting one dollar into the economy increases the "liquidity" of the economy by much more than one dollar.  Small changes in the reserve requirement have a huge effect on the actual number of dollars sloshing around in the real economy.

A second factor is that the bank's assets were in tatters because they had been marking-to-fantasy rather than marking-to-market.  The collapse of the housing market left banks with a balance sheet heavy with non-performing loans and properties that could not be sold to cover the loan.

These two factors were causing the economy to lock up.  There was simply no credit.  Banks could not make new loans as they complied with mandated increases in the loss reserves and their nonperforming loans were a black hole for money.

The Fed made a series of very aggressive interest rate reductions to inject more liquidity into the system and to give the banks time to heal.

Guests, like fish, start to stink after three days


People and companies became addicted to low interest rates.  The Fed probably kept the rates too low for too long.  One characteristic of rates that are too low is the misallocation of assets.  People start investing in goofy things...growing oranges in Minnesota, building office space where there is no organic demand, unproven sources of green energy.

Another factor that is coming into play is that the Chinese want the renminbi to be a World Reserve Currency.  That is a direct challenge to the US dollar.  The country that "prints" the World Reserve Currency holds some huge economic advantages.  Countries that want to buy oil and other goods denominated in dollars must sell commodities, goods and services to the US....but cannot use those dollars to make claims against the US economy.  That is, they give us "stuff" for dollars they they do not use (in the United States).

Loss of World Reserve Currency status would result in all of those dollars currently cycling between the Persian Gulf and China (and elsewhere) would race back home and be redeemed.  That would trigger a vicious round of inflation as holders of dollars tried to turn their dollars into tangible commodities before everybody else did the same.

Now that there is a credible threat to the hegemony of the US Dollar, the Fed has to "defend" the dollar to demonstrate that the United States Government is committed to preserving the purchasing power of the dollar.
Posted by Eaton Rapids Joe at 10:23 PM