Getting the last word

Not surprisingly, they both fixate on "having the last word."

In the doggie world, having the last word involves covering up the previous visitor's pizzle with your own. 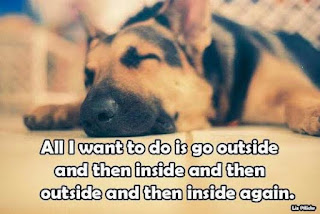 For logistical reasons, we have two doors that we let the dogs out.  I should name one door "Facebook" and the other door "Twitter".

Every morning and every evening is like this.
Posted by Eaton Rapids Joe at 7:07 AM