Yes, Virginia, you can "coach" speed

It is an article of faith for some coaches that "You cannot coach 'speed'".  They are, of course, wrong.  A truer statement is that "Some coaches do not know how to coach speed."

One might go to a University to find an intelligent person.


For younger athletes, the biggest gain is in teaching the basics of "stride".


Many young athletes are "trotters".  Attempts to "run faster" are self limiting.

If you were to plot the path of a trotter's hip, it would follow a path similar to the one depicted in the image.  It looks much like a bouncing ball.

Breaking down the dynamics of what is happening in each part of the trotting stride: 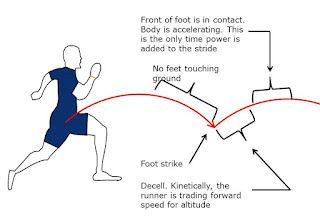 You would see that the runner is actually slowing down immediately after foot-strike.  The heel has just hit the ground.  If the ground were muddy, you would observe that the heel actually skids forward.  That means that the ground is pushing back on the body.  Kinematically, the runner is trading forward momentum for altitude.

The second part of the stride (still rising) has the front of the foot in contact with the ground and launching the body forward.  That is the only time a trotter is adding speed!

From mid-trajectory onward, the runner's body is not in contact with the ground.  They are a ballistic missile reentering the atmosphere at that stage of the stride.

Attempts to "trot faster" quickly reach a point where ballistic missile stage dominates the stride.  The runner cannot do anything until their foot comes back in contact with the ground.


The easiest way to teach a "trotter" to sprint is to tell them to run on the balls of their feet.  They must not allow their heels to touch the ground. Tell them the goal is to have their foot pushing back on the ground the entire time the foot is touching it.  That is, continuous forward acceleration.

One of the finer points in coaching sprinting is that the runner must not use the ground to stop their foot.  They should be using the muscles in their buttocks and hamstrings to start the landing foot moving backward before it hits the ground..  There should be no skid marks.