One of my guilty pleasures is that I read SurvivalBlog every day.  This fact has undoubtedly been noted by the NSA and I am sure my "folder" is flagged.

I don't rationalize why I do it.  I simply enjoy seeing how other people think and how they perceive things.  Most of the authors who contribute to SurvivalBlog are very open about their basic assumptions and are delightfully transparent in their thought processes.

Recently, Patrice Lewis, a blogger from Northern Idaho lit up the readership with a post titled The Harsh Truth about Bugging out from Cities.  In that post she states that "...the concept of marauding urbanites swarming through the countryside looting and pillaging — the so-called Golden Horde..." is pretty much a non-starter.

Paraphrasing, her basic premise is that most people in cities are rabbits.  Rabbits don't flush until they are sure the fox is about to pounce.  They rely on concealment and blending in.  City people are little different. They have responsibilities that keep them tied down.  They are predisposed to shelter-in-place and to trust "the authorities" to take care of them.  They will flush when they can no longer deny the event.

Further, she contends that in the event "the authorities" are overwhelmed and cannot "take care" of the population, most of the people will be cold, tired, hungry and thirsty before they act.  The vehicle (if there is one) will be on empty (where do you think folks will go to warm up...or run the A/C if it is hot?).  Even if the vehicle has fuel there is still a likelihood that the roads will be impassible due to stalled/failed vehicles.

In her opinion, the idea that 95% of the population will roll out of our larger metropolitan areas like an unstoppable tsunami of armed, angry, criminal-combatants is just not going to happen. 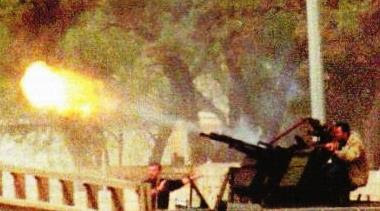 This, of course, ignited a great deal of chatter among those of us who have invested large amounts of our disposable income in multiple, surplus ZPU-4 units.


In biology, family groups push out young males.  The cougars that are trapped 600 miles from any known breeding pairs are invariably males. There are many reasons for this.

Biologically, males are expendable.  Statistically, it is better to push out 97.5% of the males to near certain death than to push out the females.  The wandering males, the few that make it...take root far from home and their novel genes reduce the likelihood of inbreeding depression in the resident breeding stock.

At a more micro level, the young males are escaping the young bull/old bull tensions of the home pasture.  They chafe at the lack of resources (receptive breeding females being primary) and the dominance posturing of the old bull.  The females also push out the young males.  They quickly tire of the young males' silly, clumsy attention seeking behaviors.  The females see the older siblings as a threat to their next brood and wish them gone.  They prefer the proven performance and protection of the mature sire.

Many commenters see sinister intent in the demographics of the Muslim invasion of Europe.  In fact, those demographics are entirely consistent with migrations that are driven by high population density.

If the behavior of other mammals, and human history is any guide, then the Golden Horde will be almost entirely the disposessed males.  They have no reasons to stay and every reason to migrate.


So, what challenges will our young, urban, dispossessed male  migrant face?

Food:
The new migrant will have a difficult time finding food "in the wild"" because the foods they are most familiar with looks different "in the wild."  Even if they have the knowledge to convert raw materials into something they recognize as "food" they will be unlikely to have the means.

Expect the migrants to stay within shouting distance of food courts, Golden Arches and 7/11s. In the event of a power outage, they will be drawn to headlights as surely as moths are drawn to light.  Those who strike off into the wilderness are likely to walk into a Ham bush when they think it is a Dorito tree.

Cover:
The cougar is able to travel 600 miles without being observed because it stays close to the environs it is most comfortable with.  Its travels are furtive and it typically stays close to creeks and rivers where cover masks its kills and movement.  The cougar does not do this for "rational" reasons.  It does that because that is how cougars are wired.

Our young migrant is wired to stay close to lights, pavement and noise.  Young migrants from Detroit will spill into Ypsilanti/Ann Arbor.  Unable to elbow their way through the earliest arrivals, they will press on to Jackson, then Battle Creek.  If they still have gas in their tanks they will meet the wave of migrants that rolled out of Chicago and is heading toward Detroit.  Things will be interesting in Kalamazoo.

Who will make it?


One class of migrants who will make it will be Veterans, former Boy Scouts and those who have previously performed farm labor.  They have exposure to austere conditions and have eaten "strange" foods.  They will have skills that they can use to pay their way.
Posted by Eaton Rapids Joe at 11:50 AM