Having a sense of direction seems to be a good proxy for situational awareness.

Two of my four children have a solid sense of direction.

One is an abject failure at having a sense of directions.

One is somewhere between the extremes.


One of the critical habits that inoculate a hiker against becoming lost is the habit of looking behind them.  Things look different when one walks the trail in the other direction.

Both of the "can't get them lost" kids have great situational awareness.  They scan.

I think that the emotionally grounded do the same...but it is called "being grateful".


The hopeless one lives in the mind.  They are completely absorbed by the moment.  They see life through a soda straw and have very little awareness outside of the topic that is immediately in front of them.

At age eighteen our kid and a car full of friends became lost on the way to mall.  We received a frantic phone call from our child.  They were on M-43 (westbound) passing through a town on the extreme western edge of our county.  None of the four near-adults remembered to turn right (east).  They turned left on M-43 and none of them were able to decipher their mistake.  In fact, they kept expecting the Lansing Mall to pop up on the horizon even though it was 25 miles east of their present position.

I am told this is not uncommon.

The one in the middle


The one in the middle is a vexing case.  I blame technology.

Accepting defaults written into software results in a loss of context.  One reason for the loss of context is due to limitations in resolution, the other is our addiction to multitasking.

Paper maps, for instance, can hold an excruciating amount of information.  Smart phone displays, on the other hand, might be five inches on the diagonal and have 1200 X 600 pixels of resolution.  In order to be readable, the authors of the software will display a very local picture...perhaps as far as the next cross street.

Another issue is that GPS is designed with the intention of being used while driving.  Embedding too much information on the screen would tempt the driver to take their eyes off of the road for an excessive amount of time. 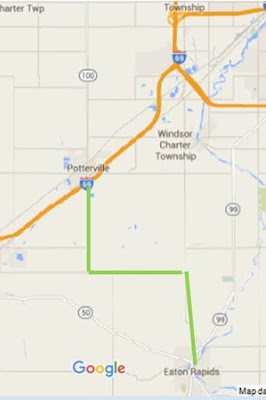 A typical Eaton Rapids resident going to Grand Rapids (northwest, off picture) is directed by GPS to get to the freeway by the green path shown above.  The path takes you to a freeway entrance/exit with fast food restaurants and gas stations. 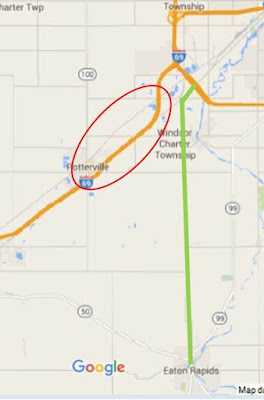 Anybody who takes the time to look at a paper map can see that the route shown above has the same length of green line but eliminates four miles of freeway (circled in red).  There are no restaurants or gas stations at this exit.

My kid is convinced that the GPS default is shorter and faster.  In their mind, nothing on paper can be as compelling, as up-to-date or as refined as anything that shows up on their smart phone.

Self awareness is a matter of taking control of one's life.  That is a scary thing to many people.  But to quote Robert Little (Altair Engineering), "Well, as a matter of fact it IS Rocket Science.  But Rocket Science is not that hard:  Just remember, "F=ma" and "For every action there is an equal and opposite reaction.""
Posted by Eaton Rapids Joe at 7:47 PM