Nathan and Cheryl moved to Eaton Rapids two years ago to be closer to their kids.  Unable to find work in their field they took control of their destiny and started a business.

They have a lot of experience starting businesses.  Between the two of them, they have either owned or started nine businesses.  Needless to say, they have many connections, a tolerance for risk and a willingness to put in many hours of hard work.

Their current business is what the stodgy bureaucrats at the State of Michigan call a Special Transitory Food Unit.  Fortunately for me, both Nathan and Cheryl were very willing to talk about their business.

The smoker is the centerpiece of their business.  I pried a little bit.  I leaned on them to learn how much a custom smoker cost, in case any of my readers wished to start this kind of business.


They were a bit hesitant to share that information...because they did not know.  The smoker is a loan from a friend who just wanted to see it used.  Their business has been picking up and they are paying him a little bit of rent for it, but it more a matter of good will than sharp-pencil business.

Clearly, with minimal fixed costs most of the customer's dime can hit the plate.


I asked Nathan if he would be willing to elaborate on his relationship with brick-and-mortar restaurants.  I was surprised when he did not hesitate to fill me in.

He has a relationship with the brick-and-mortar cafe where he parks his smoker.  He does not compete with them.  He is only open when the cafe is closed.  His menu is very different than the cafe.  He works at the cafe during peak business times as part of his "rent"....he only lives a block away and can be washing dishes or slinging hash five minutes after getting a phone call.

His business increases the visibility of the cafe.  It is never a bad thing for a business to have customers driving to your address.  (OK, maybe it would be bad if folks were dealing drugs...but we are not talking about that kind of thing.)

He also drops off a meal for the owner near the end of their day.  Like any mom can tell you, food tastes better when it is not the food you have been smelling for six hours.

Cheryl chimed in.  She said that it is critical to offer a menu that is unique.  They don't offer pizza because there are already 12 places that sell pizza in this town of 5200 people.  Pizza is a commodity.
Another key point is to not find yourself with one foot on the dock and the other in a canoe.  Nathan and Cheryl simplified their inventory control by buying and preparing less food than they can sell.  They do not have leftovers.  Therefore they do not need a refrigerator or any of those hassles.  Their customers are trained to hustle down to the smoker when they are in session, otherwise the food will be gone.


A STFU cannot compete with brick-and-mortar with a full menu, but they can rotate through a wide range of foods.  One factor in menu involves the "deal" their suppliers can make on any given item.  Sometimes the supplier finds themselves stiffed on an order of fresh, wild-caught salmon.  The STFU solves a problem for the supplier.

In the past week the foodie wagon served the following items:
They are flexible.  They have even catered wild game dinners.

Random observations, in no particular order


You better like your business.  Cheryl and Nathan estimated that, on average, they both worked sixty hours a week if you looked at the nine businesses they have been involved in.
In retail, it is mandatory that you like people.  Cheryl described their niche as "not plastic."  They see themselves as an alternative to Plastic buildings staffed by Plastic people serving Plastic food eaten on Plastic furniture.  Both Nathan and Cheryl agree that the customers seem to enjoy the Sizzle as much as the Steak.

Starting businesses can be very smooth and fluid.  Nathan and Cheryl were running the smoker on Fridays at their last business (a coffee shop).  Their clientele followed them.

Connections are better than money.  Their smoker:  A connection.  Their 400 square feet of asphalt:  A connect.  Their food suppliers:  Connections.  Their supplier of Maple, Cherry and Applewood: Connections.

It is essential to have a "playful mind".  One of the local business schools (Northwood University) has been carpet bombing the area with ads for their "entrepreneur" program.  The voice-over is a smarmy young lady announcing, "The world does not need more businesses.  It needs better businesses."  I asked Cheryl for her opinion on that ad.  She snorted.  Cheryl believes they have it exactly backwards.  The key to starting a business is not to write a perfect business plan and then borrow a million dollars.  The key is to keep your costs low, to work your butt off and to keep trying new things.

Cheryl pointed to chicken wings as an example of something they test marketed.  Nathan was sure they would lose money on them.  Cheryl bought well and made sure they were ready just before the weekend's marque "games" were televised.  They had guys walking in and buying fifty wings at a pop.  It blew Nathan away.  Cheryl's $175 investment in wings yielded better data than an academic's $4000 case study would have given.

Sometimes you have to let go.  Nathan figures that, as a couple, they helped 25 people become business owners.  In some cases it was a business they were selling.  In other cases they offered advice, cheerleading a list of trustworthy suppliers or help in "running the numbers".  In turn, those new business owners network and help Nathan and Cheryl in whatever way they can...be it loans (a great way to avoid fixed costs) or referrals.

It is easy to talk about liking people.  I saw evidence.  A young lady pulled into the parking lot shortly after Denise scored the last meal.  The young lady was driving a minivan.  Her face fell when they told her they had shut down for the day.  Then Nathan asked, "You gotta kid in that van?"  She said, "Yes, I have one kid back there."  Nathan told her, "Here, take the last two ribs. One for you and one for your kid."  When she asked how much she owed him, he told her "Just take them.  I don't have enough to make a meal.  Just remember us the next time you are hungry."  I risked a quick look at Cheryl's face.  Her face told me that she thought that was a GREAT way to get rid of the last two ribs of the day. 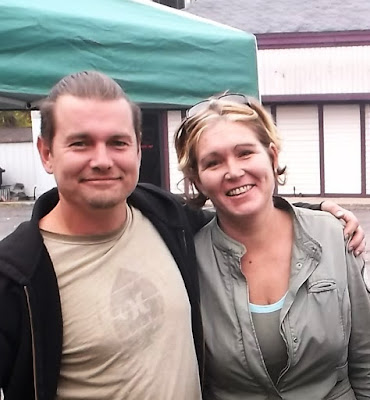 Life is grand when you have a partner you mesh with.  Listening to Nathan and Cheryl banter with both customers and between themselves was as entertaining as a night of Improv at a $5 cover club.


The weather will soon get crappy and the walk-in traffic will thin out.  You can get a hold of Nathan and Cheryl for catering or to pre-order wings at the following email address nathan.swezey@gmail.com  I will update the contact information as it becomes available.