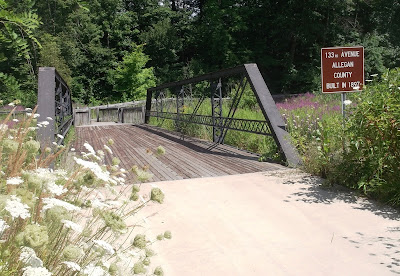 "Being grateful" is not the usual reaction to food poisoning.

But I am grateful that the piece of chicken was very thoroughly microwaved.  I think that all of the pathogens were dead and I only had to deal with the toxins.

I am grateful that I spit out the first (and only) mouthful because it tasted "off".

In retrospect, I wish I had thoroughly rinsed out my mouth instead of just spitting.


I am grateful for the timing.  All of the purging was done before our Friday day trip.  I was still cramping.  My body still wanted to get rid of every vestige of the toxins.  But there was nothing left to push out.

I am grateful for the long shelf life of Loperamide (aka, Imodium).  The blister pack in our medicine locker had expired 18 months ago but it still worked.  There is much to be said for storing meds under favorable conditions, that is, cool, dark and dry.

I am grateful that we got to spend some time with Mrs ERJ's second cousin.  Mike is a retired Civil Engineer.  He used to work for the Michigan Department of Transportation and he was responsible for inspecting highway bridges.  Consequently, he knew about "Historic Bridge Park".  This little county park in Calhoun County (Michigan) is sort of a retirement home for old wrought iron and steel bridges. 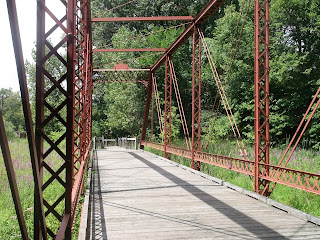 Mike was our tour guide and he was personally invested in this park because several of the bridges were "retired" on his watch.  In many cases, the bridge was not retired for safety reasons but because they were either not wide enough to meet current standards or because they were too flexible....drivers were not comfortable with the amount of creaking and sag-and-sway they experienced while driving across them.

The comment about their still being safe requires a little more discussion.  One reason narrow bridges get retired is because drivers start hitting the sides of the bridge as they approach them.  Historically, this was due to drunk and/or drowsy drivers.  Now it is more often due to distracted drivers (i.e., focused on their communication devices).  These collisions don't do the bridges any good.  They were designed in the days of horse drawn conveyances and were not designed to withstand that kind of beating.  It also does not do the driver's, passengers or vehicles any good.

Sidenote:  According to Mike, modern bridges are designed to be highly redundant and structurally indeterminate.  That means that a truck can plow into an abutment and the bridge will, most likely, remain standing such that vehicles on the upper span can safely clear the span.  Of course, the bridge is likely to be declared unfit for use until repaired....but it will, probably, not come crashing down.

Even further, it is is now general practice to design in a "sacrificial" beam on the outsides of the bridge.  This is most typical of railroad bridges where the vehicular traffic passes beneath the railroad tracks.  It is prohibitively expensive to raise the elevation of the tracks so this type of bridge is likely to be lower clearance than road-road overpasses and thus more susceptible to vehicle-span strikes.

Another trend in bridges was to get away from above-roadbed trusses.  Putting the support structure beneath the roadbed reduced the likelihood of drivers hitting it. Of course, some drivers will still try as shown in the video shown above.

Cousin Mike was a fabulous host.  He pointed out little details like head-stamps on bolts (see, I meant nuts-and-bolts literally!) and the shape of weld beads and was able to estimate when various maintenance work had been done on these bridges.  He also treated us to a delicious picnic lunch.


As a Mechanical Engineer it was necessary for me to give him a little bit of grief.  Our pet name for Civil Engineers is "Target" Engineers. He was very good-natured about the ribbing.

He reminded me that Civil Engineers have saved more lives than all of the Doctors in history by virtue of the design of sewerage and waste water treatment plants. Then he shared a pretty cool idea he had:  Why don't waste water treatment plants capture the methane generated by the anaerobic processes and use that methane to power gas-turbine/generators to make the plant self powering?

Mike's primary motive was not economic but to armor the waste water plants against power interruptions.  Weather events that cause power interruptions often dump a lot of water that would challenge the plant even if the power stayed on.  He sees it as a public health and an environmental health issue.  And even if the plant does not produce enough methane to power a turbine it could be supplemented by natural gas.  The NG pipeline system is not dependent on the local power grid to maintain pressure.

He noted that people near waste water plants sometimes complain about the smell.  That smell is methane gas.  The observations that "A weed is a perfectly good plant growing in the wrong place." and "A problem is simply a misplaced or under utilized resource." are still true.  It was neat to see how Mike's mind works.

He is a sharp guy.  I am grateful that he invited us to visit "his" park.
Posted by Eaton Rapids Joe at 1:58 AM