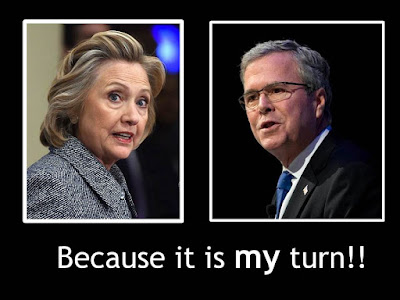 In a surprising news release, Hillary Clinton, Inc. filed a suit in New York City against Jeb Bush.  At issue is the use of the campaign slogan, "Its my turn!!"

Mrs Rodham-Clinton claims that her slogan, "Its my turn, dammit!!" predates Jeb Bush's slogan "Because it is my turn!!!"  Insiders claim that choice of font and the multiplicity of exclamation points were also listed as copyright infringements.

Jeb Bush filed a counter suit in Pensacola, Florida claiming that his slogan was unique because it avoided excessive self-absorption as evidenced by the lack of bold "my".  Further, his slogan uniquely avoids gratuitous profanity as dictated by the values of his core constituency.

The printing industry filed an amicus curiae in both cases proposing that both parties agree on the same slogan and poster (example shown above) to simplify their production and logistics.

A poll by See-eN-eN to uncover public sentiment revealed that 316,999,998 citizens wonder when it will be their turn.
Posted by Eaton Rapids Joe at 10:47 AM

Email ThisBlogThis!Share to TwitterShare to FacebookShare to Pinterest
Labels: Satire