As reported earlier, Belladonna was a pretty fair discus thrower in high school.  It got me to thinking about throwing equipment.

As an engineer, there is no problem so simple that an engineer cannot make it more complicated.

So how could something this simple be made complicated?

The answer, of course, is that it is not as simple as it appears.

A thrown discus is an airfoil, just like an airplane wing.  It is not an optimal airfoil, but more about that later.

Later, increased understanding in fluid dynamics informed us that the reasons were two-fold and partially related.

The dimples delay the onset of a separated, turbulent region behind the ball.  They do that by transporting small pockets of high pressure (higher energy) air from the front of the ball to the rear of the ball.  There, that high energy air pumps up the boundary layer and delays separation.  A secondary benefit is that the dimples prevent the separation from propagating freely from the point of origin and increasing in area.

The other benefit is that they accentuate the downward "bending" of the trailing plume (when the ball is back-spinning), thus creating lift.  Lift means the ball flies farther.

This idea of pumping high energy air into a failing boundary layer is used in airplane flaps.  Fowler flaps bleed high pressure air from the bottom of the wing and directs it to the top of the flap, thus delaying an unpleasant bit of business called "stall".

This image gives a good pictorial of the progression of the boundary layer as it matures and then super-matures.  The recirculating region (rust brown) is called separation and destroys lift.  Obviously, lift is desirable if the pilot and passengers wish to avoid a high speed collision with the ground.  Lift is also desirable when the athlete wishes to throw the disc a long ways.


Discs are really crappy air foils.  Their contour is too abrupt and the radii are very sharp.  In spite of that, lift contributes to significant gains in distance.  One nice thing about non-optimal systems is that large gains can be gained with modest effort.

Sometimes old ways are best.  Scuffed up discs throw farther, at least according to anecdotal evidence.  Athletes become superstitious about their equipment and are loath to retire "lucky" discs.  The problem with scuffed up equipment is that it continues to change and it is probably not optimal.


Many venues allow the addition of stickers to equipment. 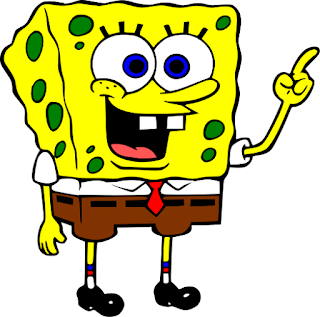 Visualize a disc covered with Spongebob Squarepants stickers.  Further, imagine the sticker is printed on 0.7mm thick vinyl stock and each hole is approximately the diameter of a golf ball dimple....and the holes are punched out rather than printed in ink.  Viola!  Dimples.


Imagine an extreme retro disc made of unfinished wood, perhaps Red Oak.  The wood is made of wedges that are glued together and then turned like a bowl with the top and the bottom of the disc showing the end grain of the wood. 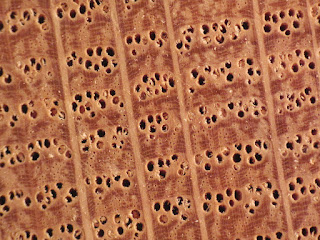 Well, shazam!  Those longitudinal pores extend a long, long way in Red Oak.  You can actually blow bubbles through a 12" long piece of Red Oak.  What better way to bleed high pressure air from one side of the disc to the other.  Fowler flaps, courtesy of God.

There is undoubtedly some optimal way to arrange those rows of longitudinal pores to delay the onset of separation.  Perhaps those rows should be arranged radially, or circumferentially or in a sawtoothed ray configuration.  It may prove that what is optimal for a right handed thrower is non-optimal for a lefty....but that may be as easy to fix as flipping the disc upside down.  That is for some enterprising engineer/athlete to determine.

Another avenue to optimize is to determine if hollowing out the disc is of benefit and/or perhaps to separate the top and the bottom such that the boundary layer at the rear of the disc is enriched by higher pressure pressure air from the top-front of the disc rather than from the bottom-rear.