Corn as High as a Elephant's eye 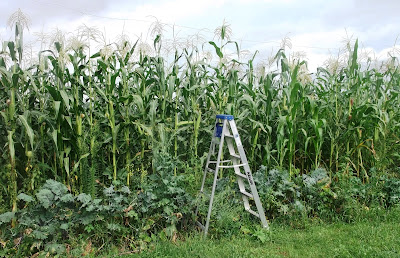 Modern hybrid corn is much shorter than the older, open pollinated varieties.  Shorter corn is more resistant to lodging (that is, being blown over) and, consequently, can be fertilized more heavily.  Shorter corn does not squander resources by investing in stalk that is inefficient at photosynthesizing.  In fact, the optimum height would be a single corn leaf carpeting the ground.

One advantage that taller corn has over the shorter,  modern varieties is that taller corn is more tolerant of marginal weed control.  The taller corn simply overtops the lambsquarters, Giant Foxtail, amaranth, nettles, etc.  Most of those weeds top-out between four and six feet of height. Once shaded, the weeds lose vigor and become much less competitive.

In days of yore, farmers did not have glyphosate, simizine, atrazine or 2,4-D.  Cultivation was not done from an air conditioned tractor but by walking behind a horse or with a hand hoe.  Sometimes weeds got away from the farmer.  That is one of the simple facts of farming: Stuff happens.  Tall corn provided the farmer with a final safety net when that happened.

It is easy to become arrogant from our perspective in history.  It is easy to think that farmers in 1900 were unsophisticated yokels who would not be competitive in today's environment.  A key point that is missed is that, in general, those farmers were all about competition and optimization.  The difference is that their systems were optimizing to a different set of boundaries and criteria.