Early in our courtship, Pre-Mrs ERJ told me that one of the things she liked about me was that I was a GSD kind of guy.  No, not German Shepherd Dogs kind of guy.  Getting "Stuff" Done kind of guy.  Her previous beau talked a great story, bought all the books, could expound for hours at parties, but never got around to putting a hammer-to-nail.

Well, we now have German Shepherds.  Mrs ERJ held out a long time.  The picture in her head was that there is no reason to have a dog that weighs more than 40 pounds.  She held firm until Belladonna melted her with charm.  Now we have two of them.

And that was this week. 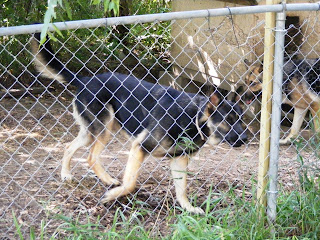 Zeus started jumping out at will.

He had been scaring the delivery people.   They could see that he could leave any time he wished.  We started having to pick up the large USPS parcels that would not fit into the mail box at the post office

What sealed the deal is that we have been alternating which dog we take on our daily three mile walk.  And, this week, Zeus decided that he did not want to wait his turn.

Mrs ERJ authorized me to do something to improve the perimeter fence on Stalag 13.


The sharp observer will notice some black "sewer pipe" at the bottom of the post on the right side of the gate.  That sewer pipe was a fix to prevent the Boston Terrier from squeezing through the gap at the bottom.