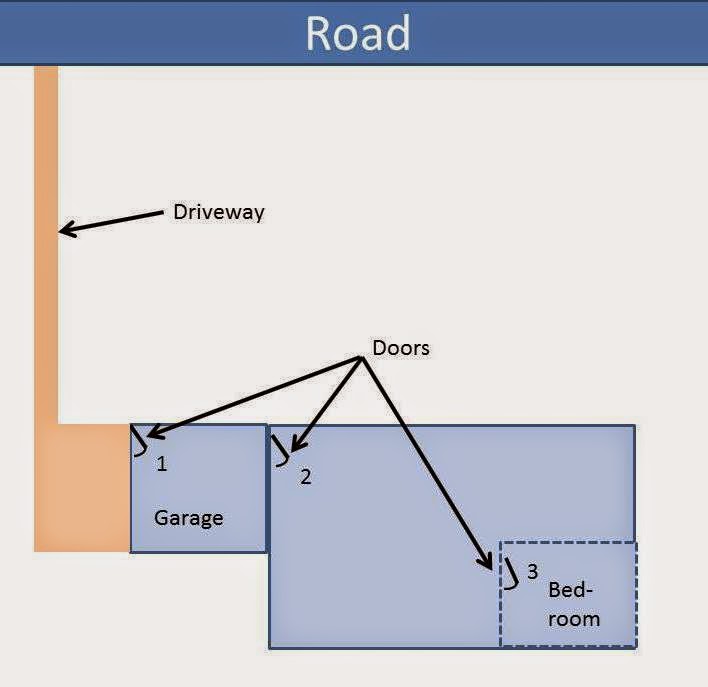 <=====Back to Part I, Threat Assessment and Armoring my House

I want to discuss why Door #2 is the critical choke point.  I will discuss each door in order.


Garages are extremely porous.  My garage door is frequently up.  Mrs ERJ parks in the garage.  I park outside.

Our automatic garage door opener went Tango Uniform about 4 years ago and has not been replaced.

As a family, we do not have the discipline to secure our garage.

Additionally, based on the layout of my property, my garage is my "front" door for guests arriving.  We cannot hear them knocking on Door #1 from inside the house.


Door #2 cannot be seen from the street so bad guys would not be nervous about beating on that door.  That means that a half-apple attempt to armor that door will have little benefit.

Also, since the bad guys walked through my garage they could have easily picked up any number of items to use as tools to either beat on this door or pry on this door.

A topic that will be discussed in a future blog post is the fact that $220 steel, exterior doors are little more than visual barriers to a motivated intruder.  They function more as fire doors than as security doors.  The edges of the door are particle board faced with "white wood".  Easy to drill, easy to cut, easy to install.  Easy to defeat.

But won't they just use another entry point?

There is a high probability that the person entering your house is a person who has been there as a guest.  It could be your boy's former girl friend or a ne'er-do-well cousin.  They came in through that door.  That is the door they will try first because that is how their mental map is oriented.

Once a bad guy commits even a modest amount of effort into overcoming a specific entry point they usually fall into the sunk-cost trap.  The sunk-cost trap is the bane of problem solving because it causes tunnel vision which blinds problem solvers to root causes that are outside their original diagnoses.

I have a brother who is a firefighter.  One of the primary objectives in extradition training is to internalize a "clock" so the team knows when to abandon a technique or strategy that is unsuccessful.  The standard technique when extracting a victim from a crumpled vehicle is to put some blocks beneath the vehicle beneath the hinges of the front door, then to start cutting structure.  The vehicle usually opens up and allows access to the occupant, simultaneously unpinning their legs.

My brother's team responded to one call where an eighty year old woman had been in an accident.  She was driving a 25 year old Olds Delta 88.  The frame of that car was so cheesy with rust that they were not successful in pulling her out until they tried the third plan.

It was a pretty intense event. The extrication team had to work around EMTs who were running IVs and preemptively pushing fluids into her in anticipation of bleeding and a blood pressure crash.  My brother was soaked with sweat.  "I dunno, Chief.  Maybe 70 or 80 minutes."

"Nope.  It was just a skoosh over seventeen minutes."

Tunnel vision includes sensory exclusion and loss of time calibration.  The guys battering on Door #2 do not have my brother's training.  They are unlikely to step back and formulate a Plan B or a Plan C.  Their default Plan B is to turn around, get back into the car and leave.

The key to sucking them into the tunnel vision trap.  That means that the armor on Door #2 must be unobtrusive but effective.


The National Rifle Association has excellent information about "safe rooms".  The drill is to gather everybody into the safe room, call 9-1-1 and to stay on the phone.  It is critical that you communicate the exact location of your safe room to the 9-1-1 system.  In my case it is the room in the southeast corner of the house.

The National Rifle Association advises that you stay inside your safe room until the police knock on your door and the 9-1-1 operator confirms that the people knocking on the door really are the police.  Do not, do not, do not leave your safe room and go hunting the bad guys.  That strategy does not have a happy ending.

That strategy keeps you out of harms way and simplifies the job for the police.  They will Taser (or otherwise subdue) everybody in the house who is not in the safe room.

If you hate guns, then invest in some pepper spray gel.  Get several containers so you can practice outside using a tree as a target.  I am not wild about spray because it will also blind you if your furnace is running.  But if you are on a budget then this item is a great choice.

My gut tells me that police who respond to a home invasion and find the bad guys in your bedroom, alive but incapacitated; those police are more likely to commend you than to read the fine print on your container of pepper spray.
---End Disclaimer---