The price of property in Fort Vermillion, Alberta

I had a long phone conversation with one of my friends who I used to work with.

He took a hard left turn after lost both his job and his pension when the economy globalized.

He and his wife took a eco-tour this summer. They cruised Antarctica.

The staff scientist insisted that it is all over, that the chance to save the environment passed us by. Complete non-carbon based economy by 2030 is too late.

They contended that we should be in an ice age based on solar output but the temperatures keep going up.

One of the reality checks I made was to price out property in Fort Vermillion, Alberta.

With our current climate, Fort Vermillion is one of the most challenging places in the Western Hemisphere to survive. Not impossible; challenging.

If the climate was to warm significantly, Fort Vermillion might one of the few places where humans can survive. 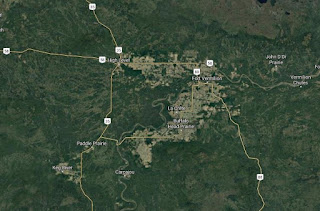 Based on the current climate, one would expect housing prices to be...soft.

Maybe some people are voting with their wallet.
Posted by Eaton Rapids Joe at 8:42 AM