List sorted by per-capita-income, a common marker for "poverty".

Wayne County, home of Detroit, has the very lowest life expectancy and has a per-capita-income 37% higher than Lake County.

Leelanau County has the highest life expectancy and has a per-capita-income 14% lower than Oakland County. A reader might comment that Leelanau County is a small county and therefore not a good sample.

Dropping down to the second highest life expectancy, Ottawa County, which has a per-capita-income that is 30% lower than Oakland County. Ottawa County is not a micro county in terms of population. 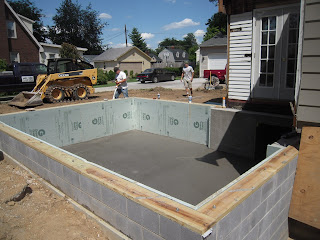 The height of the tops of the sill plates don't match up. Was it the actual dimension of the lumber or the skill of the masons?

Economists have a droll description for many of the chronically unemployed. They have "Employment resistant personalities". That is, they don't show up for work, they get in fights with bosses, other employees and customers. They don't accept authority. Are either incapable or unwilling to follow written instructions.

If you went to a nurse and asked them, "Who will have the less favorable outcome: A poor person or a person who does not comply with treatment?" Wanna bet who they will pick?

The point of this tangent is that there is much overlap between the traits of the person who has "Employment resistant personalities" and who will be non-compliant with medical treatment.

Stretching the foundation analogy to the limit: Life outcomes, both economic and for health, are cumulative. One bucket of fried chicken or one cigarette or shaking salt on your food once, missing one doctor's appointment will probably not kill you. Telling the boss he is full of BS ONCE probably won't get you fired.  But brick-by-brick the outcomes diverge between counties with different cultures.

Non-compliant personalities and lack of trust in authorities could be a shared, underlying cause for both poor economics and poor health outcomes.
Posted by Eaton Rapids Joe at 10:57 AM