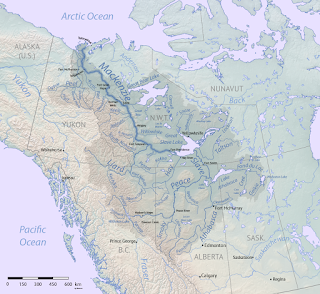 
People across the Canadian Arctic are catching more salmon in more places.

Ms. Darcy McNicholl is a biologist with DFO at the Freshwater Institute in Winnipeg. McNicholl has been working on the effects of salmon migration on the waters of the NWT because they are an invasive species. “All five species of Pacific salmon showing up in the McKenzie River,” McNicholl said.

McNicholl says there is however already a resident population of Chum Salmon in the McKenzie River. “They have been there for a very long period of time since the last glaciation, so there is a small population of Chum Salmon that are native,” McNicholl said. “As for the new species of salmon they’re either following their preferred habitat, or they’re following food or both.”

“It’s a little too early to say if they have a negative impact or not,” McNicholl said. “What we’re trying to understand is where they’re coming from, what they’re eating and whether or not they’re successfully spawning in the Arctic rivers.”

McNicholl has begun studying the diet of the caught salmon which may have some clues as to why they are headed into Arctic waters.

“The stomach’s that we observed have mostly been empty,” McNicholl said. “Once they migrate into freshwater they’re coming up the NWT rivers to spawn.”

McNicholl says she has studied tissue information from the caught salmon and that has shown that the salmon might be using different sources than some local fish like arctic char.

“It’s a little early to say whether or not they’re a danger to some of the native species,” McNicholl said. “It’s an important study because it’s affecting the fishermen of the NWT.”

McNicholl says there are a lot of places where they used to catch primarily Arctic Char and now the fishermen are seeing a lot more salmon.

I don't want to editorialize but the author and expert knee-jerk assign the cause to global warming. It would be a stronger article if they offered other hypothesis like the shifting food-base caused by massive overfishing of the North Pacific and the Bering sea. Salmon follow the currents and the food base.