Mrs ERJ an I went for a walk yesterday.  We were checking out the new Valhalla-Riverwalk trail link-up.

It was a perfect day for taking a stroll.  Traffic on the trail was heavier than expected.  Most of the walkers and bikers were gawkers just like Mrs ERJ and me.  I did not take many pictures.


The south branch of the River trail complex follows the general path of the Mason esker.  Most of the esker has been mined out for gravel, leaving a string of small, deep, spring-fed lakes.  These lakes are surrounded by private property and they are picture-book pretty.

We ran into two parties of note.  One was a group of three boys of about 16 years of age.  They had just caught a salmon in Sycamore Creek.  I did not have the presence of mind to photograph the fisherman.  They were pretty happy campers.

We also ran into a sharp-eyed gentleman who was walking the trail.  He seemed to be walking with a proprietary air.  He was a friendly cuss and was willing to stop and chat.  It turns out that he is a local celebrity, Gene Wigglesworth.  Mr Wigglesworth has been the Ingham County Sheriff for about 26 years.  That tells me two things:  He gets the job done and he does not needlessly antagonize people while doing it.

It turns out Mr Wigglesworth lives close to the project.  Like any project that stretches out over four miles and is open to the public, there have been some incidents of vandalism.  Most of it is probably stupid kids stuff.  Things like, "Hey, look, they left a key in this piece of equipment." and "How far do you figure they pounded these surveyor stakes into the ground?"  Other incidents maybe were or maybe were not caused by vandals.

Sheriff Wigglesworth appears to be a firm believer in proverb "El ojo del amo engorda el caballo." (The eye of the Master fattens the stallion). He was out, enjoying the weather, keeping an eye on the crowd and checking to see that public funds were not being wasted.

There were two other quirks worth noting. 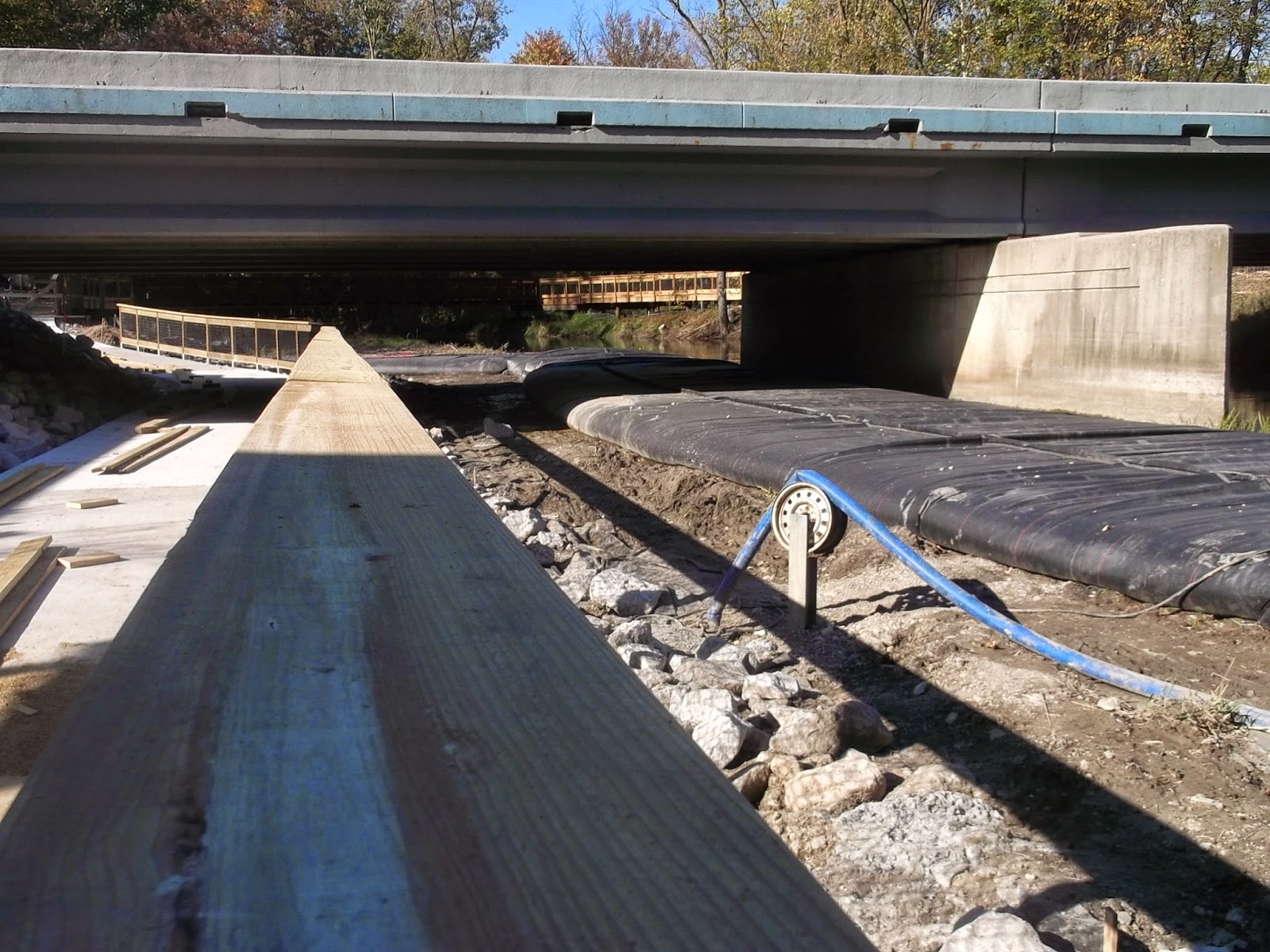 One is the lack of "head room" where the trail goes beneath I-96.  The trail passes beneath the freeway parallel to Sycamore creek.  This portion of the trail is fated to be flooded for substantial portions of each spring.

The other quirky thing is that I saw evidence of a guerrilla gardener.  Somebody had tucked some American Chestnut trees along the trail, just south of the I-96 right-of-way.  The trees looked like they were three or four years old and they were doing well.  Whoever planted them did so before the trail was put in and they were discretely placed.

It was a very pleasant way to spend a few hours with my sweetheart.