The Warbow of the Penobscots

This warbow (Tong-bi) is as shown to me by Big Thunder, the Penobscot Chief, at Boston Sportsman's Show, December 12, 1900.  He was then seventy-seven years of age, perfectly straight, and six feet four inches in height.

He said that the bow had been in his tribe for over two hundred years; fifty-five years ago it was put in his charge by his uncle, the late Chief John Nepta. 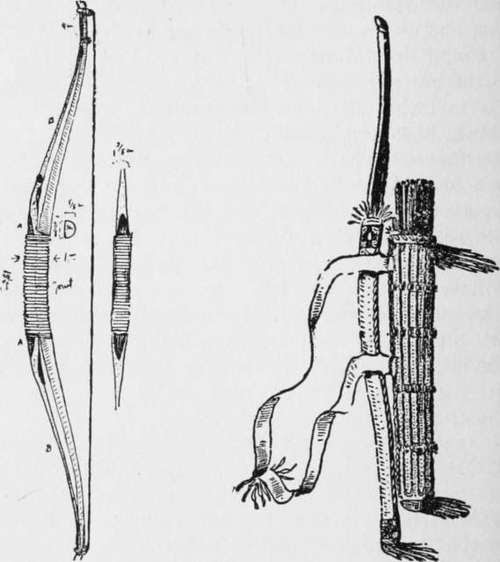 It is made of "hornbeam" in two pieces, loosely joined (like leaf springs on the back of a truck) with an auxiliary piece in front, to which are attached two long thongs of caribou rawhide.  This extra piece is bound to the arms of the main bow by a somewhat loose rawhide wrapping.

The string is three strips of rawhide, two of them loosely twisted together and the third tightly wrapped around both.

Yet the Chief told me it had killed many men and animals.  He had recently shot a two-year old moose with it.

The moose, he said, always lies down on a wound to get it next to the earth, but thereby drives the arrow home.

It does not take much to kill a deer.
Posted by Eaton Rapids Joe at 6:14 PM