The Order of the Phoenix

One of the things we did while Mrs ERJ was down south burying Uncle Bob was that we watched Harry Potter movies.

It is unlikely that Hollywood would make The Order of the Phoenix (#5) today.

There are too many people who would see it as satire lampooning President Obama and his administration.

The feckless and impotent "Ministry of Magic" attempts to control events via spin and administrative over-reach.  The forces of malevolence gather and strengthen.  People were penalized for making rational attempts to prepare and to protect themselves.  All negative phenomena are attributed to the one deficiency that deflates the metaphysical, lack of sufficient belief. 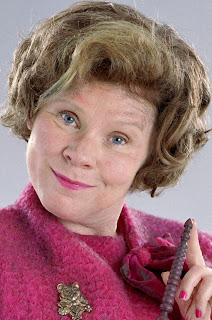 One of the main characters in this installment is Doloros (Deep sorrows) Umbridge (derivative of umbrage, a feeling of being offended by what someone has said or done...foundation of Political Correctness).  She is a hyper-controlling psychopath.  A puppet master with a happy mask.

I believe that most of my readers are too busy to watch many movies.  But I sure would like some feedback.  Do you guys see the parallels?  Do you think J.K. Rowling prescient or did she just extrapolate from the events of the period?
Posted by Eaton Rapids Joe at 4:28 PM