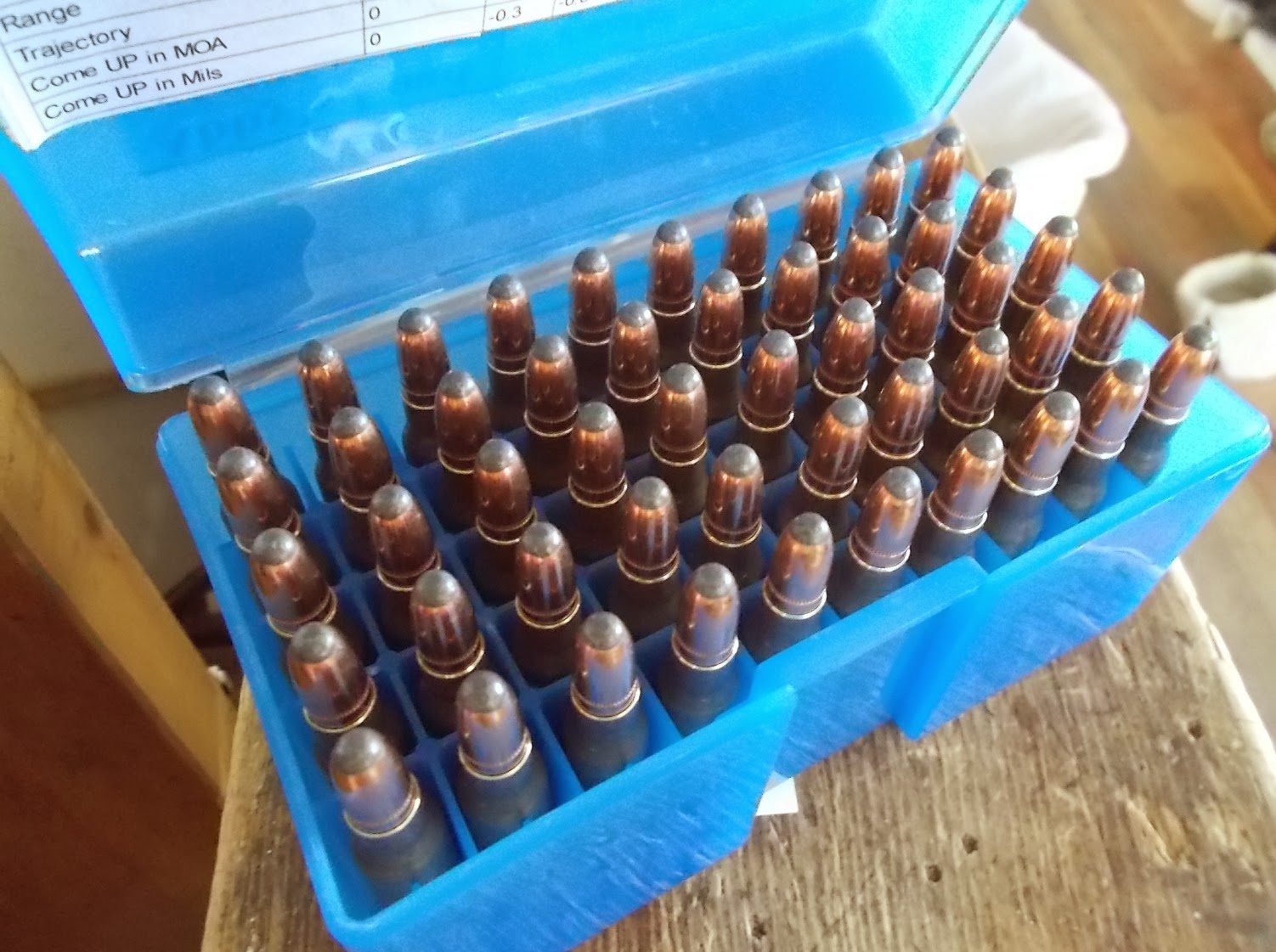 The Captain is contemplating retiring.  One of the items on his bucket list is to outfit each of his grandchildren with a suitable firearm.  One of his granddaughters is named Abby and she poses a dilemma.  She was shooting a .223 Rem last year and the performance on whitetail deer was not very dramatic.  Both the Captain and his son want to upgrade Abby to a firearm with more slap-down.  The challenge is that Abby is petite and recoil shy.

That would explain why he picked one in .308 Winchester.  The price.

The .308 Winchester is a round that was "invented" in the early 1950s.  The designers wanted to replicate the ballistics of the earliest 30-06 cartridge and make a few mechanical changes to the cartridge to make it friendlier for feeding and extraction.  Their thinking was that advances in smokeless powder chemistry and manufacture created an opportunity to downsize the package and still retain the original performance.

Some were of the opinion that the improved powders should be used to beef up the 30-06.  Their  desire for more power was over ridden by the practical consideration that the original 30-06 ballistics, 150 gr bullet at 2700 feet per second already produced more recoil that most fully grown, young men wanted to endure.

Note that military rifles are outfitted with steel buttplates for durability and to provide striking capability in the event one ran out of ammo....like in a riot situation.  The other thing is that a soldier might have to fire thier gun hundreds of times while repelling an assault.  Designers of military weapons need to think about these things.

The shape change involved shortening the length of the fully loaded cartridge from 3.3 inches to 2.8 inches and to beef up the extractor groove and rim to accommodate the more violent action of semi-automatic weapons operation.

The weapons designers were successful.  The .308 Winchester does what it is supposed to do.

The fly in the ointment for the Captain is that a fully loaded .308 Winchester still has noticeable recoil. And that does not bode well for Abby, even with the recoil being mitigated by the gas operation and a new sissy pad.


The 30-30 Winchester is almost 120 years old and still going strong while dozens of challengers faded away and disappeared.  Typical 30-30 Winchester ballistics involve a 150 grain, round nosed bullet with a muzzle velocity of 2200 feet per second out of a handy carbine.  The secret of the 30-30's longevity is that it is a highly tuned system.  The weight and geometry of the gun, the power level of the cartridge, the weight and construction of the bullet and the size and "hardness" of the typical target are all beautifully matched.

Round nosed bullets are required for the 30-30 because the vast majority of the guns out there use tubular magazines.  The possibility exists that one could detonate a round while loading it by jamming a pointy bullet into the primer of the round ahead of it.  Many writers claim that there is also a risk of the round in the magazine chain detonating when the gun is fired.  That seems unlikely to me given the amount of taper in the cartridge.  The points and the primers simply do not line up.

The key point for Abby is that there are bullets that can be launched at 2100 fps that are exquisitely effective on deer.  Yesterday, I loaded up a few and the Captain and I shot some over the chrony to see how they cycled through the gun.

The gun cycled fine.  The load is a cream puff.  The Captain gave his seal of approval.  I went home and loaded up a box.  While I was at it, I used the Hornady ballistic calculator to calculate a cheat-sheet for a 150 yard zero and glued that to the lid of the box. 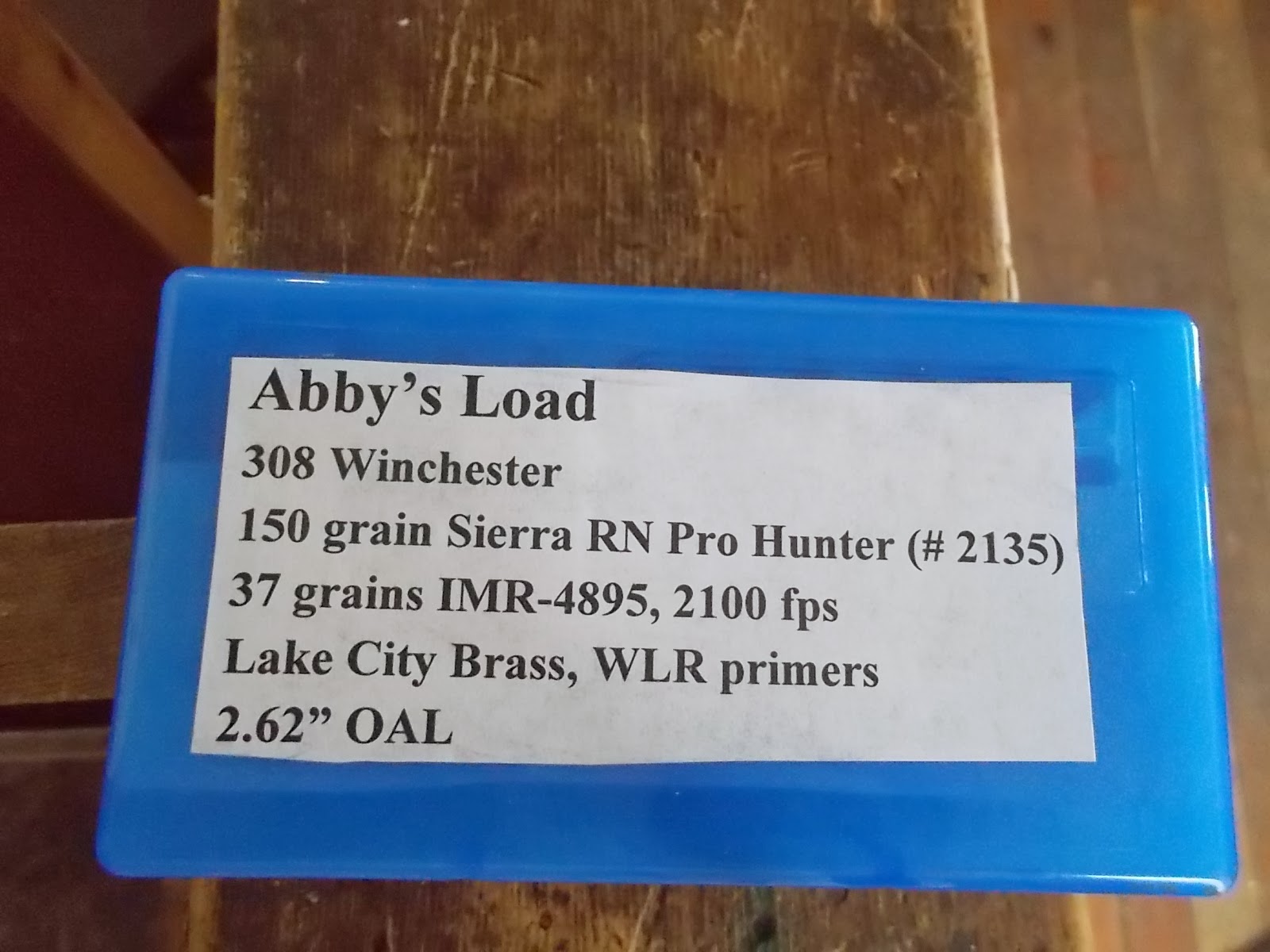 All the usual boilerplate caveats apply.  Safe in the Captain's gun.  May not be in yours.  Proceed  at your own risk.

Bullets that are designed for high velocity applications are harder.  Either the jackets are thicker or the lead composition is harder.  There is risk of them not expanding if they hit the target at velocities that are lower than what the designer originally intended.