I went to Alliant's website and pulled down their most recent reloading manual.

My goal is to produce some lower recoil loads to increase Belladonna's comfort level.  The recoil from the loads we were using (1 and 1/8 ounce of #6 shot at 1330fps ) got her attention.  That load shreds bunnies.

I favor #6 shot.  It does a fine job on Michigan upland game like rabbits, squirrels and barn lions.  It rolls plastic milk jugs with authority and is adequate (although not best) for clay birds.

One way help a shooter improve is to remove distractions so they can focus on the target.  In this case, removing distractions means "down loading" my 12 gauge so it mimics a 20 gauge.  That is, 7/8 oz at 1200 fps.


I went to Gander Mountain and the pickings were a little bit slim.

I got some of these 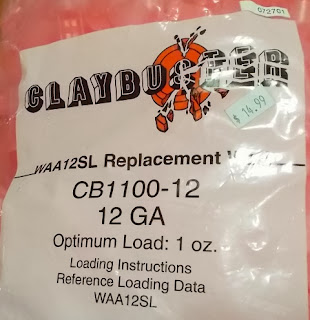 I also picked up a pound of Red Dot powder which has a burn rate that is right in the sweet spot for light, 12 gauge loads.


Smokeless powder is designed to work best at certain peak pressures.  Too low of a pressure and ignition will be inconsistent, erratic and in worst-case scenario the bullet will not exit the barrel....causing much excitement the next time the trigger is pulled.

The SAAMI maximum pressure for 2&3/4 inch, 12 gauge shotgun shells is 11,500psi.  Good manuals list the measured pressures for the loads listed.  The Alliant catalog lists 7000psi for this load, so there is a considerable margin of comfort.

Charts that map from bushing size to charge weight are not Gospel.  The approved ERJ method for weighing powder charges is to empty the hopper of the dispenser using good, safe practices.  Fill hopper 2/3 full with new powder (after checking label to ensure you are using the correct bottle!)  Cycle dispense 6 times to orient powder column and stabilize dispense.  Many powders are flakes or rods and will orient as dispensed.

Throw multiple charges into the scale's tray.  Use the same technique you will use when reloading.  If you tap the hopper three times when reloading, then tap three times when throwing your weight verification charges.  Throwing multiple charges will reduce the noise-to-data ratio.  Make sure you keep count of the number of charges you throw and to divide your measured weight accordingly.


As you can see, the crimp is cupped downward.  The component stack is obviously not too tall.  These shells passed the shake test.  Nothing came out.

In my "just messing around" mode I found I could control the cupping of the crimp by how much I pre-compressed the wad before I dumped the shot.  If I had not been able to get the Universals to pass the shake test, there are paper and cardboard pieces I can position on top of the shot to stop leakage.

Now I need to figure out a way to mark each shell so we know which are Belladonnas.  I am leaning toward a color coded paint pen mark across the base.