One of my younger brothers shot both a buck and a doe on the second day of Michigan's general firearm season.  He shoots Winchester Partition Golds out of a Remington 1187.  Two shots, two deer.  I offered to trade him a single shot for his semi-auto, straight up....but he declined.

We were all delighted at his good fortune.  That last year or two has not been kind to him.  You will never meet a nicer guy.  It was good to see his Karma kick in.


Kubota shot a doe yesterday at 5:20 PM.  We waited 15 minutes and then started looking for hair.  No hair found.  The deer was at 80 yards and Kubota had a steady rest.  He can hit a beverage can 4 times out of 5 at that distance.  The deer was stationary and oblivious.  I was confident he hit it.

We tried to "cut the trail" at a paddock division fence it had jumped over.  No blood.

We tried to cut the trail at the perimeter fence.  No blood.

We scanned the tall grass outside the perimeter fence.  Often there will be blood on the tall grass that wipes the sides and bottom of the deer as it passes.  No blood.

Kubota was all done.  It was dark.  I sent him in.  I kept looking.

I slowly worked my way down a trail that seemed a likely exit for the deer.  I went slowly because there are many things that look red in the light of the headlamp.


I heard an animal moving away from me.  That was encouraging.  It did not move away quickly.

I ran into first blood about 150 yards and one hour after Kubota dropped the hammer.  Based on the amount of blood, the deer had bedded down.

I dropped a tissue next to the first sign and went back to the house.  I let Kubota know that he had hit the deer.  I called one of my brothers and had a pow-wow with him.  He advised to wait until morning.  Sounded like good advice.

A mortally wounded animal can run a long way.  Or the hunter can be patient, let the animal bed down again and let it peacefully slip its mortal coil over night and collect it in the morning

I started looking in the morning while there was still frost.  The blood looked very dry and there was very, very little of it.


It was a matter of following the deer trails off my property.  This is what I saw on the second trail I walked down. 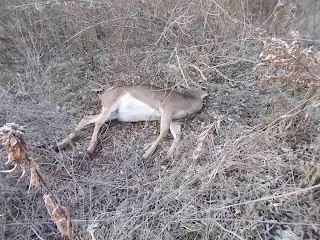 She made it about 300 yards from point of impact.  That is, she went another 150 yards from where she bedded down the first time.

I flipped her over to get a better picture of where the bullet exited. 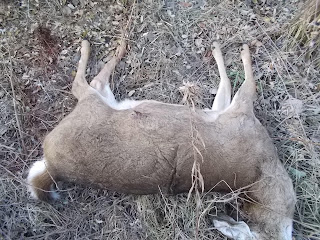 If you look closely, you can see the exit wound.  It is about 8 inches forward of the rear leg, near the bottom of the deer's body.  I believe that this deer stepped forward just as Kubota pulled the trigger.  The bullet hole is exactly 15 inches aft of the heart.  Stuff happens.

Mrs ERJ will be a little bit miffed that Kubota's new girl friend is parked in her half of the garage.


We were very fortunate to be able to reduce this girl to possession.  The bullet hit her rumen and her abdomen walls and very little else.  Fortunately for us, her path looped around in a big " C", else she would have been off-property.
Posted by Eaton Rapids Joe at 3:46 PM