My left eye is improving by leaps and bounds.  I walked on the treadmill at the gym.  This is the view from my "regular" ride. 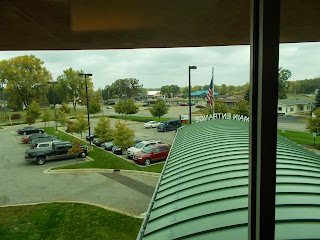 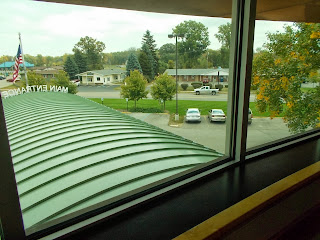 I see a lot from up here.  I see busted up men and women coming in for physical rehab.  Some of the busted up people are really old.  Some of them are middle age.  A few are young. Most of the couples are touching in their concern for each other.  I see moms coming in for appointments and bringing rafts of kids.  I saw 4 year old boys doing very proficient cartwheels in the parking lot.  I see Farmer's market on Fridays.

I watch traffic streaming along M-50.

After dropping off my gym partner I ran the 4.5 mile run and was not bothered by my eye.  Yeah!

Late the other night, before I caught the sharp stick in the eye, I got a call on my cell phone from Captain.

It turns out that he found ANOTHER feral beehive.  He waited until dark thinking things would go better.  They had settled into an old speaker box that somebody had pitched into the tall weeds.  He carefully placed the speaker box in a top-bar hive, placed the top-bar hive atop some swim noodles for padding in the back of his Gator and started driving this way.

The bees did not like his script and started improvising.  He was on the Gator getting stung when he called me.

He whipped up the driveway and stopped in front of the garage.  He leapt off the Gator and dashed inside.

"They are yours now.  Bring the Gator back in the morning."  he said.

I put on a face net and some winter cover-alls.  I got on the Gator and moved them out of my driveway and next to a barn. 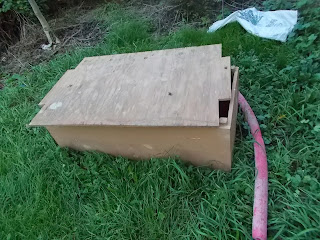 The speaker is too big to fit inside the top-bar hive so the lid does not fit.  One of the noodles did not make it back inside the Gator.

I am now the proud owner of four bee hives.  Two of them are courtesy of Captain.  I may have to buy him a bottle of snake bite medicine....or bee sting medicine.  I understand Wild Turkey Rare Breed is good stuff.

One of the joys of my life is sampling apples from apple seedlings as they come into bearing.  I am the first human being to taste them and I get an explorer's thrill.  Goldrush seedlings continue to impress.  You can never really know who the papa was, but in my orchard it is a good bet that Melrouge fathered a goodly percentage of the Goldrush seedlings.

The seedlings are late.  They are hard.  They have quite a bit of starch (powdery flesh) that will turn to sugar as they age so they should increase in sweetness.  They hang tenaciously. Size is adequate. I tagged two trees with green flutter tape to keep track of them.

It is a pity that my camera cannot capture the flavors of these apples.

I started doing some dry firing.

One of this blog's mottos is "Too poor to paint and too proud to whitewash.", so what you hear will not be pretty.

Like many people in the hinterboonies, I have at least one shooting iron squirreled away in a place where it might come in handy.  That is one of the guns I decided to dry fire.

Well, the locks on the lock-box were distinctly gritty and did not turn smoothly.  Hmmm!  Make a note to lubricate them.

Once out of the box, I noticed that the hog-leg was missing the cylinder.  My memory is that, at one time, it seemed advisable to have an additional degree of separation due to unpredictable kid behaviors.  Dang, where is that cylinder.

Fifty-eight seconds later the cylinder was located and installed.  That would have taken much longer on a dark night with a goblin knocking on the door.  We are going to have to rethink that.

Dry firing drills were executed.  Locks were lubricated with ATF.  Gun was stowed with the cylinder in place.  Lock box was stowed in its designated place.