Many years ago I was driving east-northeast out of Lansing on I-69.  I had been delayed and hit the freeway at about 9:00 in the morning.  It was late September or early October.  The sky was clear.   I was driving a company car that cost more than my house.  It had excellent speakers!

I was a bit stressed due to running behind until this music* came on the radio.


The heat of the sun was hitting the road signs and sheets of vapor were unfurling about their tops. 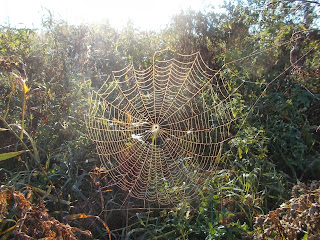 An arachnid armada of 10,000 dew bejeweled spider webs billowed in symmetric synchronicity in the tall grass beside the road as my ride smoothly cruised the asphalt that led to Flint, Michigan.

The music opened my eyes.

It was as if God was speaking to me.

* Petronio Franceschini Sonata in D major for 2 Trumpet.  The recording I heard was by John Wallace from his album Man - The Measure of all Things.
Posted by Eaton Rapids Joe at 10:00 PM