Happy St Jude's day.  St Jude is the patron saint of lost causes.  I believe there is a mural of him in the Detroit Lions locker room.


I took Belladonna to a doctor today.

While filling out the paperwork I was stumped.  On the line for insurance it asked for Primary Insurance, Car Insurance (?) and W.C.  For the life of me, all I could think of was Water Closets.  So I wrote down 2.5

Later I learned it was an abbreviation for Workman's Comp.  I guess I qualify as Country Bumpkin of the Week.


Pumpkins used to be grown for food before they became ornamental accents.  Breeders took the pumpkin in a different direction once the primary market became decoration.  They got bigger, oranger, shinier.  They boosted the production by making the rind thinner and harder and by reducing the plant's investment of carbohydrates in it.  That is, they changed if from food (carbs) to the vetagable equivalent of a blow molded plastic beach ball.

There are still varieties bumping around that were selected back in the 1880s-1900.  One of those is Winter Luxury.  I grew a couple of vines this year and I have one baking in the oven now.

Skin is almost like a cantaloup.  Rind is much thicker than common pumpkins. 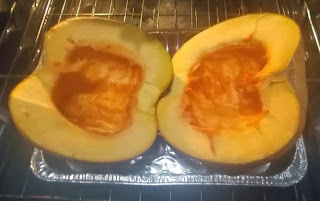 I will let you know how it tastes.

We also sampled Shinko Asian Pears.  So far my favorites for flavor are Chojuro, Olimpic and then Shinko. 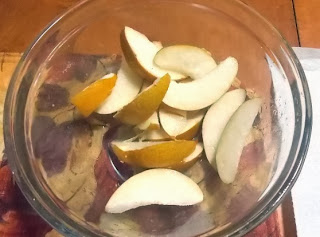