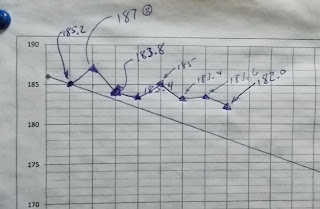 Not where I want to be, but much better than gaining one pound a week.


I once had a boss named Gary.  Gary was a vacuum cleaner around donuts and any other kind of sweet.

His doctor diagnosed him as diabetic and told him some things had to change.  I think he would have preferred to die young and happy but his wife got a vote.  He started eating rabbit food and exercising.

Gary enlisted the aid of some of the work people closest to him.  Most of these guy were tool makers and die makers...guys who think best with their hands.  They religiously went to the gym where they lifted, hit the tread mill, the eliptical and so on.

Just as religiously they would cut an inch off the end of Gary's belt every three weeks and punch a new hole while he was in the shower.  Gary had to buy two new belts before he figured it out.

Boy, was he pissed!  Pissed as his waist size "grew".  Pissed when he found out what his buddies had been doing.
Posted by Eaton Rapids Joe at 5:56 PM