It has been a big week for romance at the ERJ house.

It is Homecoming week in Eaton Rapids.


Kubota's girlfriend broke up with him.  It lasted two and a half weeks, which was about 10 days longer than we expected.  For most kids in 8th grade, "dating" is mostly about drama and being on center stage.

The extraordinary longevity of the romance appears to be related to the fact that they don't share any classes.  The script requires that the break-up occur in public (otherwise, how would anybody know that you had been dating?)

That left lunch time as the only available time slot for the theatrics.  The difficulty was that lunchtime break-ups are booked 10 days in advance.  It would be WAY tacky to have two break-ups going on at the same time.  Who would the diner's watch for their entertainment?

The first hint we had that Kubota had been through the trauma was when he showed up wearing his favorite hoodie.  That's what dating in Eaton Rapids Middle School means.  The girl is wearing the boy's hoodie.

I think the origin of the practice was from TV.  The two love interests go home together from a bar.  The next morning the girl is fixing stirring coffee in the guy's kitchen while wearing one of his hoodies.  Most guy kitchens I have seen the girl would be better served wearing shower sandals and carrying a taser.

Other than the fact that Eaton Rapids 8th graders rarely pick up girls in bars, transport them home or drink coffee.....wearing hoodies makes perfect sense.  They sure are much cheaper than rings.

Kubota is recovering emotionally.  The fact that Captain learned of Kubota's recent travails and dropped off the following item helped. 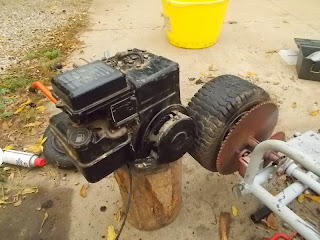 As of Wednesday, Belladonna had not been asked out to Homecoming.  It was starting to wear on her.

It is a huge annoyance to many of her friends who are girls.  They pine away waiting for the guys to call while Belladonna is deadlifting with them and punching them on the shoulder.

But the boys don't see her as a "romance interest".

She called her study-buddy (a guy who already has a girlfriend) and 'splained the situation.  He then made a few phone calls.

She was asked out (by text, I assume) early Thursday morning.  She accepted.  It is with her best friend-who-is-a-guy.

Meanwhile, I need to find a file to sharpen the German Shepherd's teeth and inventory my supply of pepper spray and buckshot.  My youngest daughter is going on a date.
Posted by Eaton Rapids Joe at 8:31 AM