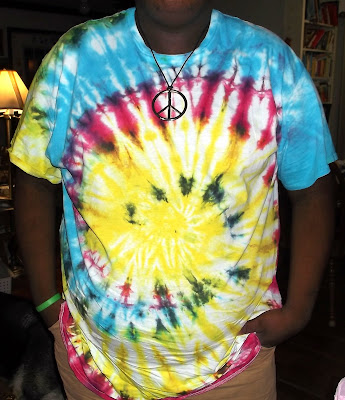 Homecoming week involves theme days.  Today's theme was "The 1960s".  Students were supposed to dress up in a '60s theme.  The number of students who participate in each class will be counted and will contribute to the final score.

For whatever reason, Kubota caught fire with this theme.  He asked Mrs ERJ to make a tie-dyed shirt for him.  I think she knocked it out of the park.

The 1960s were a funny decade.  The casual observer remembers 1969 but one can make a case that the 1960s had three distinct flavors. The mid 1960s were marked by L. B. Johnson.  Civilian life was marked by self-absorption, good grooming, automobiles that went much faster than their tires or brakes could contain.  Politically, it was a period of unprecedented crassness, cynicism and mendacity.  Nobody paid attention.

The late 1960s were marked by the British music invasion, burning inner cities, Woodstock and war protests.  While the match may have been struck for counter-culture icons like peace symbols, tie-dyed shirts and recreational drugs; those did not reach their full flower until the early 1970s.

It is only in retrospect that we see the 1960s as if we were hanging out with the leading edge of the early adopters.  Such is hindsight.  It is like looking at a the caboose of a departing train.