I will never admit this to Belladonna but there are some cool apps for smartphones.

This app is called Spectroid and it has a FFT (Fast Fourier Transform) software that converts a time signal into the frequency domain and charts it as a waterfall or carpet plot.

The sound shown above is the sound of a fence shorting out every second.

Why is that important? Because the Captain's hearing is not what it used to be. It would be pretty cool if the sound could be characterized so he could use his smartphone to find shorts. 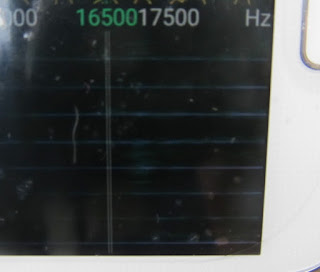 This is a soft short inside a cracked insulator. Yes, you are seeing the frequency scale correctly. I expanded it to look at the 10,000-to-20,000Hz range. That range is unpolluted by everything except small song birds, chipmunks and the sound of shoes brushing through damp grass.

That last one surprised me. If we could hear well in that range then feet walking through tall grass without lifting them up would sound like fingernails on chalkboards. 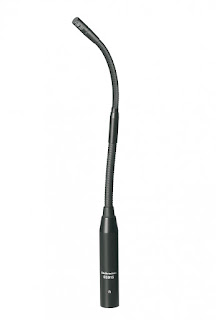 One intriguing way to apply the information for the fence shorting is to bond two microphones together side-by-side approximately 1/4 wavelength apart atop the band connecting a set of headphones. Then process the signals so the frequency is in the highly audible range, say 1/20th the input and play them stereo into headphones where the phase relationship between the two signals is maintained.

The point of maintaining the phase relationship is to allow our ears and brain to process the signal for direction.

Is this a huge market? I don't know. But it would be very cool to hear the shorts arcing through cracks in the insulators from farther than 12" away.

I want to document the high frequency of feet brushing through vegetation under several different conditions. It may disappear with dry or mature grass or it may be that wind generates the same content. But it would also be very cool the 10kHz-20kHz band was a clean way to hear people and animals sneaking through the underbrush.