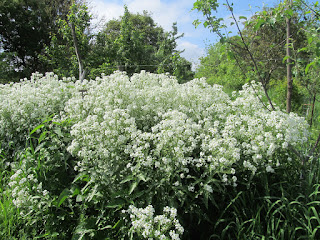 There are undoubtedly hundreds, if not thousands of species of parasitoid wasps. They are just now getting attention for purposes like stopping the Emerald Ash Borer and Chestnut Gall. For the OCD, the difference between parasitic and parasitoid is that the parasitic control leaves the host alive but debilitated. The parasitoid flat out kills the host.

The current research suggests that providing suitable nectar sources can extend the effective lifespan of parasitoid wasps by a factor of three.

Anybody who has hung out near a prime nectar source like rhubarb or horseradish quickly realizes that they pull them into the orchard like a beacon. 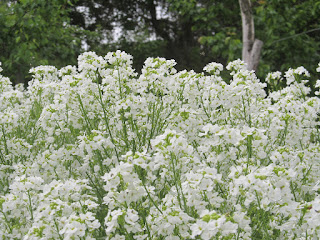 This is what blooming horseradish looks like. In a perfect world I would have varieties with bloom times that spanned from the end of apple blossom until after the plum curculio (an insect pest) pressure ended.


The plum curculio is the hardest pest to control in Eastern orchards. It shrugs off most easily available pesticides.

Other sources say that curculio like warm (+70 degrees F), sunny days and cool, rainy days slow them down.

Typically, I would expect to start seeing heavy plum curculio damage on my apples around June 1.