Rain showers expected through the day.

Belladonna is home.  This is a "hair" weekend.  All of the little micro-braids come out.  It is a marathon movie watching session as her fingers fly.  Later this weekend she has a session with Rosemary.  Then her hair is virtually maintenance free for six-to-eight weeks

Yesterday I picked one of the North Georgia Candy Roaster squash.  The seeds are drying.  The flesh was cooked, cooled, mixed with sugar, eggs, milk, cinnamon, nutmeg, ginger an mace. 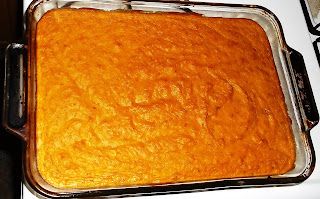 It is a crust-less pumpkin pie.


Between showers, I went over to Roger's house and tidied up a job I started earlier.  It turns out that Roger has two, zero turn mowers.  The larger one was sidelined due to fuel leaks.  Roger and I road-tripped into town with the old, rotted out fuel line.  We replaced it all with new.
Roger is very fond of wire twist ties.  He proposed that we use them to route the fuel line and secure it so it could not drift over to the exhaust pipe.  I am not as impressed with twist ties as Roger.  Today I lashed down the fuel line with zip-ties.   I used black ones because I think they have more resistance to UV light, always a consideration for equipment that might get parked outside.

It is a good thing that I did.  The hose had walked over and was within an eighth-inch of touching the exhaust pipe.

As an additional measure of overkill, I sleeved the outside of the exhaust pipe closest to the fuel line with aluminum salvaged from a 24 ounce beer can.  I don't know how long the aluminum will last in that application. I considered putting the sleeve on the rubber hose but did not want to run the risk of having the raw edge abrade the hose.
Posted by Eaton Rapids Joe at 1:11 PM