The recent celebration of Labor Day and Bernie Sanders strong showing in the polls causes me to examine "A Living Wage".

As a lead-in, I quote a progressive position

An example (of just wages) would be the current discussion on how to fund road reconstruction here in Michigan. Curiously enough, in the midst of this discussion there arose another proposal to repeal the Prevailing Wage law – which guarantees laborers on construction jobs union level wages and benefits. By doing away with this law, as one supporter said: it will cost us a lot less to build schools or rebuild roads. What was not said was that construction workers of all kinds could no longer count on earning a living wage. I would suggest that the moral principle involved should not be “what‟s the cheapest price we can pay.” The moral principle should be “paying a just price in support of a just wage.”

Price is a signal

In commercial transactions, supporters of A Living Wage is likely to be angry if he paid $8 for the Super-Duper, Roast Beef, El-Grande Wet Burrito and he was served the $1.50 Cold Bean Burrito. The justification “I served you a Cold Bean Burrito because that is the only thing I know how to make.” would be unlikely to give the customer satisfaction.

Those supports experience no dissonance when they are spending tax-payer dollars for the same mismatch between price and production.  In fact, they feel noble when they put their gift card on the present somebody else pays for.

This essay attempts to show other ways that A Living Wage is misguided. 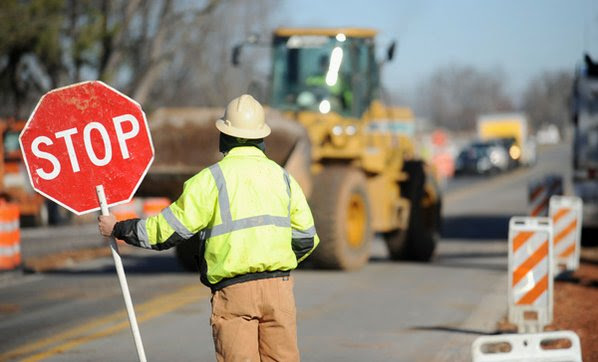 Prices, wages in this case, are traffic signals for resources. A high wage for plumbers vs a lower wage for “Greeters” or “Stop Sigh Holders” tells potential plumbers “Go”. The higher wages of the plumber are a signal that “Plumbing” is a higher use of human resources and of greater value to the economy. Lest that sound cold and clinical…the economy is people. If you have a toilet that is backed up, your life is made immeasurably better if you can call a plumber to fix it as opposed to the guy who can stand outside your bathroom with a Stop Sign.

This shifting and balancing of the economy is exactly analogous to the dynamics seen in ecosystems.  The effects of out-of-balance ecosystems has been documented since before the 1920s.

Back to road repair

The fundamental fallacy of “a fair price” for road repair stems from a misunderstanding of funding. Funding is not established by need. Funding is negotiated in the context of many, competing needs. Essentially, the funding level is fixed and a higher price…supposedly a ‘fair price’… means that fewer people get hired and fewer miles of road are repaired or inferior patching is used instead of the more durable resurfacing.

The very people A Living Wage is intended to help are the ones least able to afford bad roads. Their cars are old. The have the least money set aside for car repair. They are the ones most likely to live in a food desert and must commute over the most degraded surface streets to their job.

"A Living Wage" drives the minimum wage down to zero


And what about the guy who did not make the team? You know, the guy who would have been hired if the employer could quote the job assuming “common, day labor” wages. The guy who got knocked off the end of the bench is not making “Prevailing (Union) Wages”. He is making no wages. His minimum wage is Zero.


Many jobs that do not pay A Living Wage are worked by young people. It is a great way to explore the economy. I personally did the following work before getting a “real job”….and I was a slacker for my generation.

One of the benefits of this kind of work is that you see how folks respond to micromanagers and to incompetent technical people. It also encourages you to keep your nose to the education grindstone.

If you ask the owner of a construction company “Why don’t you build 950 square foot houses?” he will tell you “There is no profit in that size of house.”

The builder will tell you, “I have countless costs mandated by governmental units. They charge me to look at my drawings and inspect my wiring. They mandate the size of the garage and length of the driveway. I have to pay for utility hook-ups. Then there are quasi-governmental units like Home Owner’s Associations which often mandate minimum size of the unit, a site-build building, the size of the lot, exterior materials and landscaping.”

“There is no way I can charge enough for an 950 square foot house to make up for the $15,000 of ‘improvements’ mandated by non-customers.”

Our progressive forgot that every ‘improvement’ that they mandated added cost. Builders who did not find a way to recover those costs went out of business. Ergo, the only builders left are ones who found a way to pass that cost on. It ain’t free, even if the cost did not come out of your (the progressive’s) pocket.

A second example involves automobiles. One engineer proposed that catalytic converters ($400 of palladium, platinum and rhodium) were required in 1977 when electronic controls were extremely primitive and cars had carburetors. But now, nearly all of the gains, vis-à-vis 1976 can be achieved by fly-by-wire throttle control and stoichiometric air-fuel.

Catalytic converters also accumulate hidden costs.  Recent releases of API Standards for motor oil have reduced anti-wear compounds because those compounds have been linked to "poisoning" of catalytic converters.  Some automakers now require synthetic motor oils, at a much higher cost, to ensure adequate lubrication because of the depleted additive package.

So one major impediment to A Living Wage is the loss of buying power due to regulatory mandates.

Another assumption that is implicit in A Living Wage is that a household must be capable of surviving on only one pay check.  While this is desirable it is not the reality for most American households.  The median household income in the United states is approximately $52K.  The per capita income (mostly wages) is approximately $28K.  That suggests that most households have at least two people bringing home an income.
Posted by Eaton Rapids Joe at 10:05 AM