Today, the guys at coffee got to talking about Bible Translations.

The general consensus was that we are doing the Devil's work if we attempt to weaken the belief of any other Christian, regardless of flavor.  In a tree full of monkeys, shaking a monkey off one branch is more likely to result in him plummeting to the ground than having him latch ahold of your branch.

Never-the-less, sometimes people will ask "What Bible should I buy?"  I will not tell you what Bible to buy but I will give you a map. 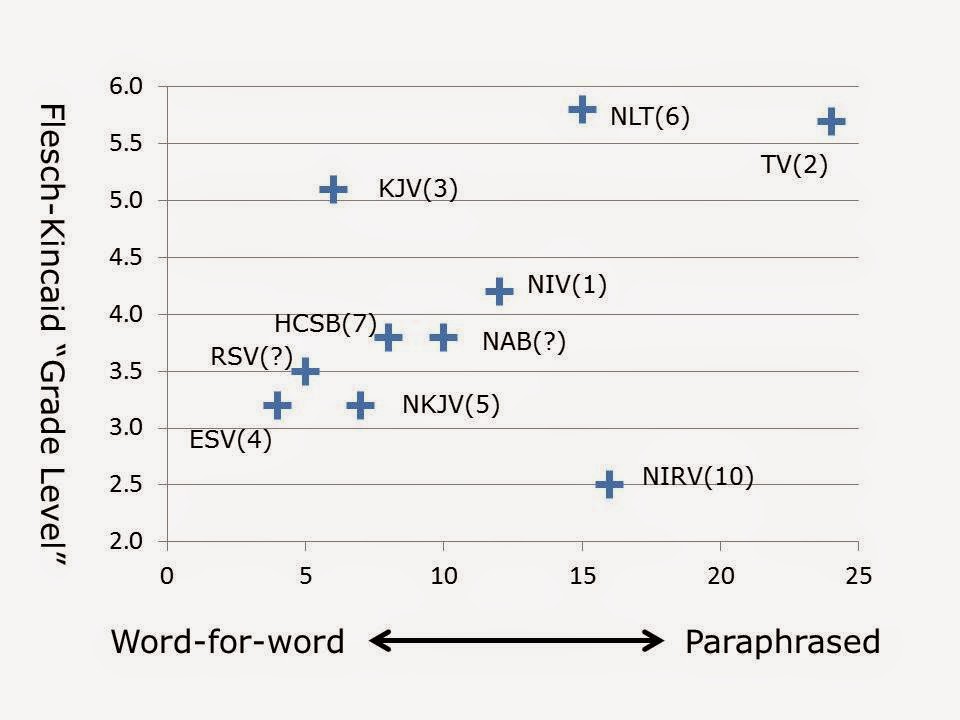 According to Thom Rainier, the top ten Bible Translations in the United States by copies purchased were:
Those sales ranks are the numbers in the ( ) on the chart.  NAB was added because it is a "Catholic" Bible and RSV was thrown in "just because" while Reina Valera and Nueva Version Internacional were not included because they are Spanish translations.

The "X" axis is an attempt to sort those translations that opted for a "word-for-word" approach or a "paraphrase" approach.  The values are ordinal values from a chart at Christian Books. The general consensus among scholars is that a heavily footnoted, word-for-word translation is more suitable for study than a paraphrased translation.  Paraphrasing adds one more set of potential distortions of the message into the equation.

The "Y" axis is an attempt to sort the translations for "readability".  The reason the Spanish translations were not included was because I have no way to compare their readability to the English language Bibles.

The readability rating was developed by taking two widely heard passages, one from the Old Testament and one from the New Testament, pasting them into Microsoft Word, activating the "Reading Statistics" function in Review and harvesting the Flesch-Kincaid Grade Level estimate.  The two chapters that were reviewed were Psalm 23 ("The Lord is my Shepherd, I shall not want...")  And 1 Corinthians, Chapter 13 (Heard at almost every church wedding)


Nobody is likely to find reading ability to be an impediment to understanding the Bible, regardless of the translation chosen.

The top three selling translations are #4, #2 and #3 in reading difficulty of the sample chosen.

The translation with the highest level of difficulty (NLT) requires a reading ability of grade 5.8

That is not to infer that the Bible was written for simpletons or that Christianity is simple to implement.  The sentence "I do." has a Flesch-Kincaid score of 0.0 and it takes a lifetime to fully understand and implement all of the ramifications captured in those two words. 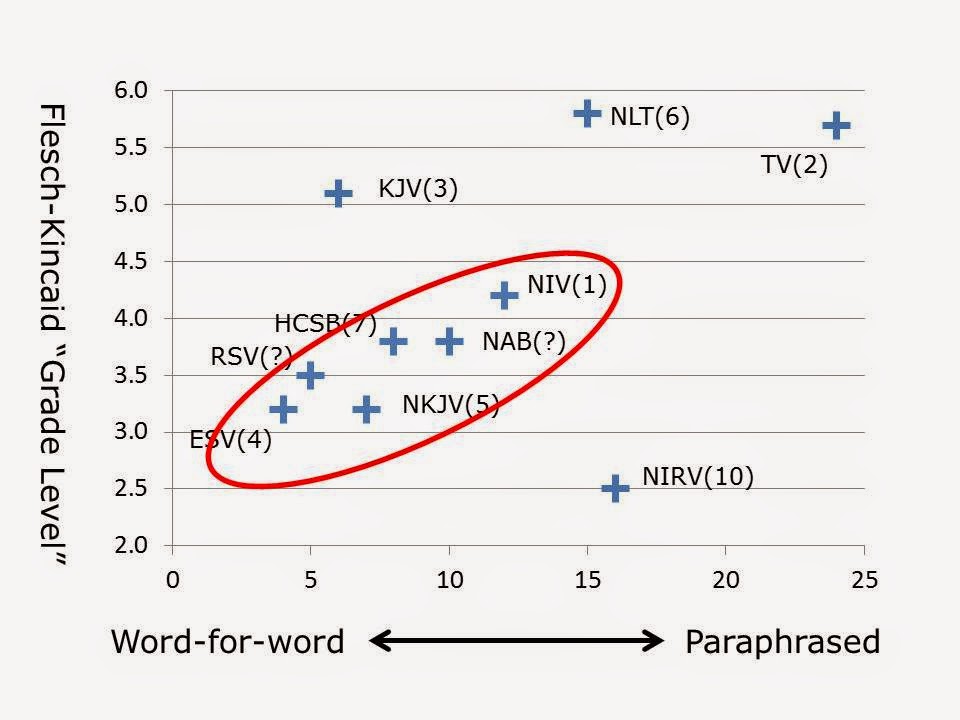 Any one of the translations within the red "pickle" are very similar for readability and content.  Word-for-word translation does not drift as much as paraphrasing because there is far less latitude for interpretation.

The NKJV gives up little to the KJV for "word-for-word" but uses more contemporary words, that is, fewer words that end in "...th"  Many Christians who grew up with the KJV love it because its unique cadences quickly puts them into a prayerful state.  It is a Pavlov thing.

The Voice is the second most purchased translations of the Bible and it is well outside the pickle.  Read a few selections from it before spending the money.


And as a bonus end-note:  Paul's Epistles

Seven letters (with consensus dates) considered genuine by most scholars:
The letters thought to be pseudepigraphic by about 80% of scholars:[6]
The letters on which scholars are about evenly divided:[6]