Is the Economy getting any better?

Mrs ERJ surprised me the other day.  She commented, "The economy really is not getting any better, is it?"

This in not a topic we usually talk about.

I decided to noodle around.  I am sophisticated enough about graphs, data and statistics to know that most people use data the same way drunks use lampposts; for support rather than illumination.

Some metrics are more difficult to "game" than others.  One of the toughest metrics to game is Civilian Labor Force Participation.  There is nowhere to hide the dirt since it is an aggregate, all-in measurement.

Another metric that is tough to game is payroll 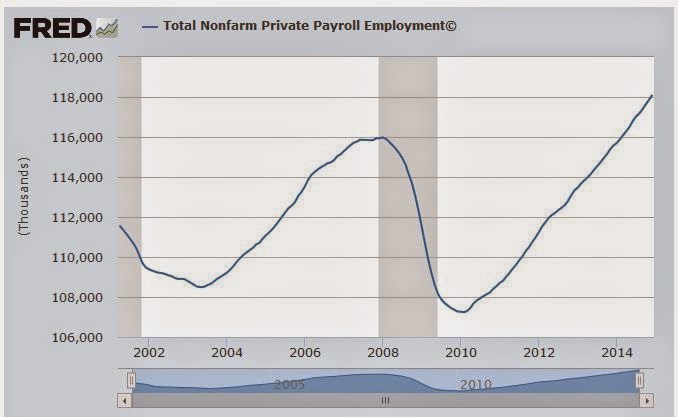 This is a much happier looking chart than Labor Force Participation.  I have a couple of questions.  For one, I don't know if these are in inflation-adjusted dollars.  11% growth in four years (2010-end of -2014) is less than one would expect to see if we are experiencing 3% inflation.

Another factor that makes this graph look better than reality is that the documented portion of the US economy grew by 4% during those five years.

I also do not know how much of the "payroll" is diverted before it hits the paycheck to pay for Federally mandated programs.

The short answer:  No, the economy has been stagnant, or worse, for Joe Lunchbucket.