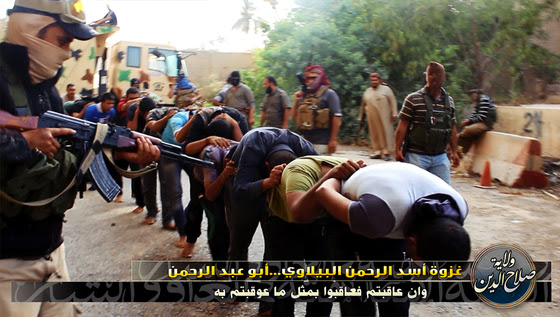 The Senate will be releasing a 200 page summary of Central Intelligence Agency (CIA) interrogation techniques used in the aftermath of the September 11, 2001 attacks against the American mainland.

The feedback from the experts who have reviewed the material is that releasing the summary to the public serves no strategic or "justice" objective and will incite violence.  It will also prove a fertile recruiting tool for the folks holding the gun in the picture shown above.


At some point it becomes necessary to decide between "Process" and "Results".

I  was a production supervisor at one point in my career.  I was working in an extremely militant union environment.  Most people no longer work in a manufacturing environment so they do not understand that factory environments vary in hostility based on "the Local".  This factory has since been closed down due, in large part, to the recalcitrance of "the Local".

We had an equipment failure and I was installing welds by hand with a portable MIG welder.  I had to sit inside the work piece and make four welds on a vertical surface.  The sparks rolled down the vertical...then diagonal surface and lodged against my thigh.

I was wearing a welding hood.  The committeeman was interviewing one of my workers at the base of the platform.  I kept my back to him when I did not have the hood down.  I was performing the repair for three hours (about a hundred jobs).  The committeeman was back at the base of the platform when the last job was repaired (no surprise there) and the fellow he had been interviewing was also in earshot.

The committeeman greeted me, "AND JUST WHAT THE F_CK WERE YOU DOING!!!"  Factories are loud environments and it is necessary to speak loudly, but this committee man was a bit louder than necessary.  I had been doing "hourly" work.  I had done it for three hours, even after I had seen him talking to one of my hourly guys.  I guess he felt disrespected.

I lifted my nose up in the air.  I sniffed several times as loudly as I could.  "Do you smell that?"

"WHAT THE F_CK?" the committeeman responded.

"Burning meat."  I pointed at the thigh of my jeans which were shredded by sparks from my right buttock to my knee.  "I can't ask my hourly guys to do that kind of work."

The committeeman shook his head disgustedly.  He walked away and I never got any grief for repairing welds after that.

That committeeman has more class than the current US Senate


Life is not theory.  Sometimes things happen that demand a relaxing of rules.  Results become important than theory.  People may do things that may unsettle your stomach to achieve those results.

But at least have the class to know when to keep your mouth shut.
Posted by Eaton Rapids Joe at 10:48 AM