Two packages into the mail.

One to Jimmi in Ludington, returning a beach towel that ended up in the Cavalier.  There may also be a belated birthday present or two.

One to R in Baton Rouge.  Mostly some fleece jackets and such.  She plans to attend a Turkey Shoot next weekend and wants to be able to dress for the weather.  Looks like a fun time and I wish I could go. 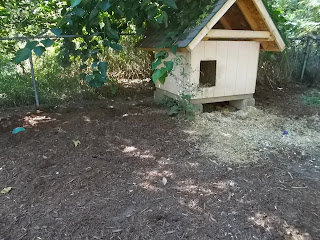 Mrs ERJ commented that the dogs coming into the house with too much dust in their coats.  Kubota and I rototilled the dog-run, raked it out and spread shredded hardwood mulch.  It looks nice but the mulch is not nearly thick enough.  It looks like I need another two yards.  I learned that shredded pallets (oak) are free so I will investigate that source of mulch.  We also put fresh wood shavings in the big dog house after raking out the remnants of last year's straw.  I think Mrs ERJ will be pleased.

Then I went and gave blood.  I am currently replacing with another red fluid.  No, it is not Dexron III. 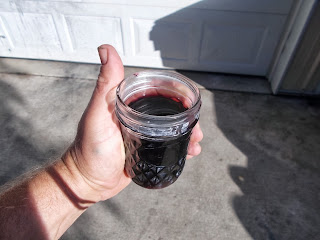 Four chicken quarters are in the oven at 325, coated with a mix of corn meal, salt, brown sugar, black pepper and garlic.  Mrs ERJ and Belladonna are expected home in 45 minutes.  I will "let" them pick the vegetable.