This will be a very delicate post to write.

One of our family members recently had their physical.  At the wrap-up, the Physician's Assistant noted that the patient had high blood pressure and was suffering from "America's latest epidemic."  The Physician's Assistant noted that one high blood pressure reading is not enough for a diagnosis and that several more readings should be taken over the course of the month to keep an eye on it.

The Physician's Assistant also noted that some lifestyle changes were in order to address the probable, underlying cause.

And that is when the fireworks started.

The word "Heuristic" stands for a mental shortcut in the way we process information.  As a shortcut, it usually saves a lot of time.  As a shortcut, there are instances when it gives you a wrong or a bad outcome.  As a student of human behavior, heuristics fascinate me because they often provide a tool that provides insight into the inexplicable. I highly recommend that readers who can read above the 9th grade level visit the link listed above.

And example would be "Green means Go" at a stoplight.   The real rule is, "You are free to proceed when the light turns green and the way is safe." 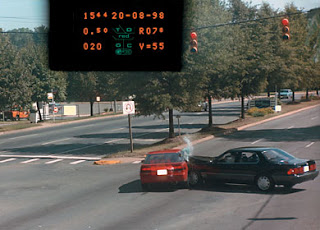 One of the most powerful heuristics is anchoring-and-adjustment.  A person will make an initial assessment (first impression!) and that will anchor their opinion.  Then, like a rowboat tethered by a anchor and a length of rope, the person will allow incoming data (the wind) to move their beliefs around that original anchor point.

The problem is that people almost never weight the new material enough.  That is, they seldom allow the anchor to drag.

An entertaining parlor trick to demonstrate this concept is to take two people and ask them in quick succession to perform an estimate on the following math problems:
1.) What is one times two times three time.....times eight?
2.) What is eight times seven times six times....times one?

Incidentally, it is the same math problem and the correct answer is 40,320.  In both cases the person formed an initial estimate and then failed to add enough Kentucky windage for incoming data.

The probable function of Anchoring-and-Adjustment is gating or filtering.  We are awash in vast amounts of conflicting data and we would become catatonic if we attempted to process all of it.  The entire concept of filtering is to remove noise...observations that contain no data.  Information that is inconsistent with beliefs is filtered out.  And you are not even conscious that you are filtering out this data.

So how do you drill through somebody else's denial and the Anchoring-and-Adjustment filters?

To quote Winston Churchill:  "If you have an important point to make, don't try to be subtle or clever. Use a pile driver. Hit the point once. Then come back and hit it again. Then hit it a third time - a tremendous whack."

In a word, you overwhelm the mechanisms with large amounts of vivid information.  Trickling information or hints will not work because that information will be filtered out of the stream.

Back to the story:

So the patient turned to my wife and observed:  "That (the lifestyle changes) is BS.  I am the poster child of physical fitness."  The patient fully expected confirmation of the statement.

The beautiful, gentle, caring, compassionate, tough-loving, and honest Mrs ERJ said, "No.  The doctor is right."

Later, I had a similar conversation.  I told the patient that EVERYBODY in America has to watch their weight.  There is just too much delicious food that is laden with fats.  It is everywhere.  It is so cheap that it is essentially free.  It is hot.  It is salty and sweet.  It smells great.  It is so conveniently packaged that we can eat it without thinking or the hassle of preparation.

So there is much anger stomping around the house.  The Mrs ERJ and I are manipulative, controlling parents. WE are hypocrites.  We do not care about anybody's self-esteem.  We only want perfect, ornamental kids.  We have no consideration for all the other things that are important.to people.

We have all been on both ends of this transaction.

We have all bumped into reality.  Our noses have been bloodied and reality remained unbruised.  It hurts. The sooner we make adjustments in our course the fewer collisions we have in the future.

We have all had to tell loved ones things they really did not want to hear.  Some of us have an uncanny knack for picking the cusp in time where the locomotive can be pivoted with the effort in a pinkie finger.  Others of us, the mere mortals, engage the subject when it comes up.  The best that most of us can hope to do is to be like Mrs ERJ, "...gentle, caring, compassionate, tough-loving, and honest..."

To be continued.
Posted by Eaton Rapids Joe at 9:02 AM