Many little pieces to the day.

I let my youngest daughter drive me around the block in our 2000 Chevy Cavalier.  It has a manual transmission.  The one pointer that she really took to heart was to give the car a bit of gas as she was letting out the clutch.  The car is a 2 door and is very sporty, which kind of makes up for the lack of a radio and the manual everything.  I will probably see her again when the gas tank is on E.

I recently received a replacement printer. The old one had some hardware issues.  Brothers kindly sent a replacement via UPS.  I put the defective printer in the box and delivered it to the UPS store in Lansing.

From there, I went to East Lansing to inspect some small trees in the Michigan Avenue median, across from Brody Complex.  I hoped to find some plum trees.  There had been some there about 30 years ago.  Alas, all I found were Cornelian Cherry.  Cornelian Cherries are actually a kind of dogwood. 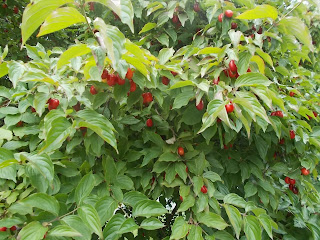 I had read that Cornelian Cherries are edible, so I gave one a try.

It was beyond sour.  It was eye-popping, teeth-crackingly sour.  I put several in my pocket to share with the family (snicker).

I wrote a first draft of our generic shopping list.  More details on that later.

I burned the brush pile that was pictured a few days ago.  Key points on burning large brush piles are to have a hose and shovel handy, to start the fire on the leeward (downwind) side so it burns more slowly.  Also, stay hydrated.

And remember the Boy Scout motto:  Be prepared (marry a Girl Scout).

Now my wife is off to a sleep study.
Posted by Eaton Rapids Joe at 9:38 PM