Visit to the doctor

Well, that took a while!

One of the nurses kept popping into the waiting room to tell us that there was only one doctor on staff and the nurse was trying to hurry her along.  We finally got in to an examining room at 11:50 AM.

I was left with the vivid impression of Dory, the incredibly people-oriented but distractible fish from Finding Nemo.  Same voice, same cadence, same jumping around from topic-to-topic.

I can see why they were running a little behind.  My daughter was grumbling until we got into the examining room but then basked in the glow of all the attention.

"Dory" told my daughter that it was a good thing to have infected piercings looked at.  "Dory" told her that she has seen piercings that had mushrooms (of scar tissue) growing out the backside.  She had seen piercings, most often of the navel, where the entire area became necrotic and the post fell out. "Dory" also mentioned how close the ears are to the brain, although lips and nasal piercings are even more problematic.  "Dory" mentioned that cartilage is not very vascular and heals very, very slowly.

Youngest daughter got a shot in the butt.  I asked what it was but did not recognize the name so I know it is nothing I can buy here.  She also got a prescription for Keflex.

Then youngest daughter and I had lunch while the e-prescription was filled.  We ate at the local grocery store which has a fine salad bar.  $18 can buy a boat load of salad at $5.99 a pound.

Then we ran around a bit trying to find the prescription.  Turns out "Dory" sent it to the other drugstore in town.

We came home and I took a swing at making the banana-spicecake-applesauce-oatmeal-chocolate chip muffins we mindlessly watched a talking head make 3X while soaking in the waiting room.  They turned out very well. 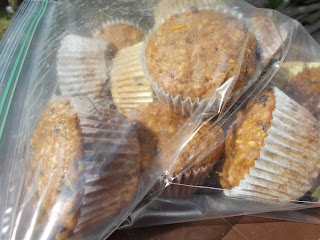 Now we are off to a lake to go swimming.

Run the impulse sprinkler to get those stupid seeds to sprout.